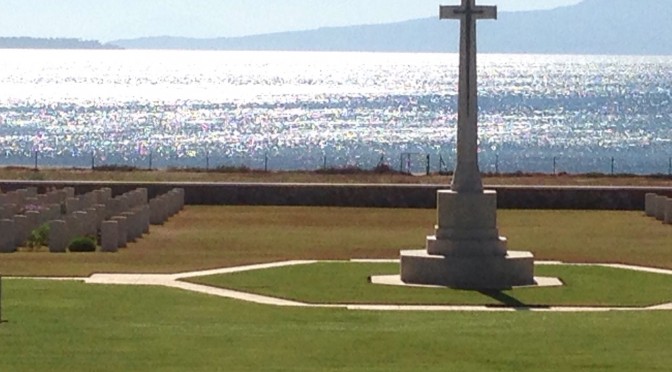 53 Louisburg Battery’s Exercise Louisburg Pegasus took place in Crete with aims that encompassed developing an ethos and a pride in the air assault role, understanding information, surveillance and  target acquisition.

One of the most impressive aspects of this exercise was the way that the unit had organised planned syndicate discussions on doctrinal concepts. The exercises used the German invasion and occupation of Crete in the Second World War as a vehicle for introducing all ranks to doctrinal concepts.

“Stand 5” was the site where the British and Cretan Resistance abducted general Kreipe, the German Commander of the Island.   His vehicle was stopped at gun point and he was driven away in his own car. When he was in command he was known for responding to challenges by sentries with “Don’t know who you know who I am?” A policy he might have regretted when held at gun point in the back of his staff car while Patrick Leigh Fermor wore his cap.

These are the questions considered by the syndicates:-.

Syndicate A: Sometimes, effect can be achieved by minimal tactical engagement (eg through influence or strategic SF ops). Discuss the similarities and differences between the approach here and the way in which it would be conducted now (mentioning LOAC if needs be).

Syndicate B: Security and surveillance in a cluttered and contested battle-space: how might events such as this be avoided?

Syndicate C: The German COIN problem: the similarities and

differences between their approach and our own experience (post Boer War, Malaya, Afghan…).

Syndicate D: Planning and executing an abduction…how would you go about executing this operation?

The intellectual discussion didn’t take place at the crossroads, but over an ice-cream and a lemonade in nearby Archanes.