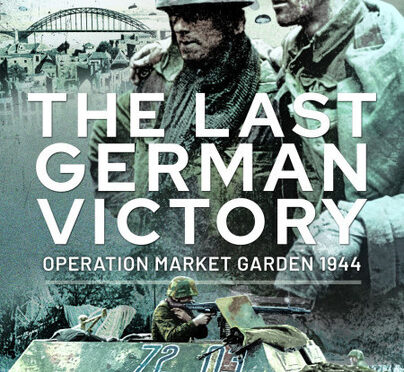 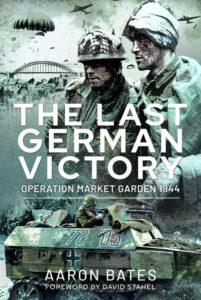 This looks like Aaron Bates’ masters thesis: the second chapter includes the word  “Historiography” in the title. He takes a different approach to Op Market Garden, looking at the doctrinal differences between the German and British forces and how this shaped the outcome of the battle. It excludes reference to American doctrine, It is an academic study rather than a direct historical narrative, so don’t read this if you don’t know anything about the battle. The foreword is by Australian academic David Stahl.

I have not seen this approach before. In a nut shell, the conditions of Op Market Garden played to German doctrinal strengths. The stress on individual initiative and aggression meant that the Germans recovered from surprise quickly. German emphasis on self contained infantry with high organic firepower gave them a tactical advantage. The airborne assault and supposed rapid follow up by ground forces denied the British the opportunity to employ the indirect firepower and careful; planning that gave success from El Alamein onwards. He argues that the operation should be seen as a German success rather than an Allied failure. The Germans pitted old men and recruits against the finest soldiers the Allies could muster. He has a good word for the otherwise disastrous attack by KG Grabner in depleting the limited ammunition of 2 Para at the bridge

He pulls no punches in copy that would raise the blood pressure of literate Paras in his description of the failures of 1st Airborne Division’s commanders and the rout of their soldiers.

There are flaws. His analysis of British doctrine is a little superficial. His bibliography does not include anything by Terry Copp or Marc Milner., or much by John Buckley. Nor does it include anyone who has written about artillery doctrine in WW2. No Bailey, Bidwell, Farndale, Pemberton or even Townend and Baldwin. There are some dubious statements about artillery. He ignores the decentralisation of British artillery between 1940 and 1942. Command of British artillery might be centralised at the highest level, but control was decentralised via the network of FOOs and BCs. The weapon of artillery is ammunition not the gun. The weakness of 1st Airborne’s artillery compared to an infantry division was not just fewer guns, but the absence of ammunition resupply by the RASC.

This may appear to be nit picking. However, given the importance firepower played in contemporary British doctrine, it would be reasonable to assume it had been  studied.

He looks in some detail at the development of German infantry doctrine in the 1920s from the first world war Stormtroops, but seems to treat British infantry doctrine of 1944 as if nothing had changed since 1918. This ignores the British debate in the 1920s from the Great War triggered by Liddell-Hart’s influential “Man in the Dark” paper. The expanding torrent tactic was leading the British in the same direction as the Germans even if ultimately rejected.   The author of the re written Infantry Training Vol 2 expunging Liddell-Hart’s ideas was Major B L Montgomery.

The lack of research on Montgomery is disappointing, given his role in the operation and a little unfair as the target of criticism.  Bates comments on Montgomery are largely clichés.  Hamilton’s detailed biography of Montgomery is not listed as a source. This might explain why he does not appear to be aware of Montgomery’s employment of airborne troops in Sicily in a smaller scale but equally risky venture.

It is stimulating reading even if you disagree with what he writes.

The maps are reprints from Robert Kershaw’s It never Snows in September and the Holt’s guide to the battle.
208 pages 20 b/w plates.