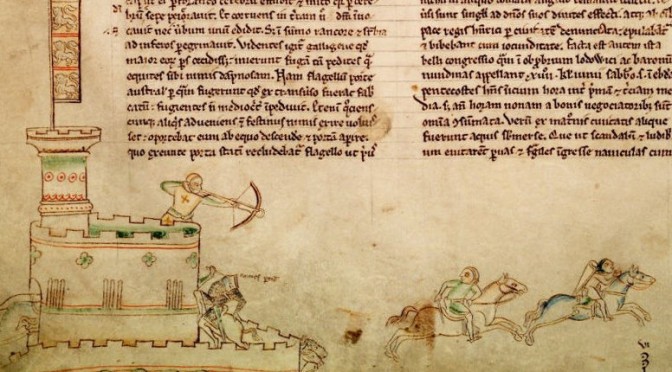 What is the connection between the unusual officer holder of a Plantagenet Local Goverment Position, the Second Battle of Lincoln and Utah Beach in Normandy?

The answer is a woman, Nicholaa de la Haye. Chatelaine of Lincoln Castle and Sherriff of Lincoln, described by the anonymous contemporary French Chronicler from Bethune as a “very cunning, bad hearted and vigorous old woman”  Nicholaa was a remarkable medieval woman who played a significant part in the Second Battle of Lincoln, 20 May 1217, the turning point of the First Barons War.

Nicholaa de la Haye is thought to have been born between 1150 and 1155 into a Lincolnshire family which claims to have owned the Barony of Brattlesby since pre Norman times. Nicholaa outlived two husbands, William FitzEmeis, who died in c. 1178, and Gerard de Camville, who died in c. 1215. The closing months of King John’s reign and the opening years of King Henry III’s minority not only saw her directing the royalist defence of Lincoln castle against the supporters of the French Prince Louis but also saw he created sheriff of the county of Lincoln. (1) The story of Robin Hood, and its villain the Sherrif of Nottingham gives an insight into the life of a Plantagenet local government official. Nicholaa was involved in seizing land from rebels and taking and moving hostages.   However she might be described in heroic terms by the Royal party as the manful defender”, she was King John’s servant and carrying out some of his dirty work.

The De La Haye Family took its name from La Haye-du-Puits in the Manche department on the Cotentin peninsular. Her second husband Gerard de Camville had commanded King Richard’s fleet and his family name was from an area near la Haye-du-Puits. Nicholaa’s family inheritance included land in Poupeville and Varreville in Normandy, on what would be the rear exits from Utah Beach. The lands in France were ultimately settled to Nicholaa’s sister Julia and her husband, which may have removed the potential for conflicting loyalties as King John had lost Normandy to the king of France in 1204.

20 May is the 797th anniversary of the second Battle of Lincoln. which was fought around Lincoln Castle on 20th May 1217. The battle was fought between the forces of the future Louis VIII of France and those of King Henry III of England, in what is known as the First Baron’s War. This conflict lasted from 1215-17 and arose in the aftermath of the signing of Magna Carta. King John repudiated the Carta and the Barons invited Prince Louis to England to depose King John. After the death of John ion October 1216, his faction fought in the name of the infant King Henry III. By May 1217 the French forces were as far North as Lincoln. Lincoln Castle itself was held for the Royalist party by Nicholaa de la Haye.

Louis’ forces were attacked by a relief force under the command of William Marshal, 1st Earl of Pembroke. One of the most famous soldiers of his day. The Comte du Perche, commanding the French troops, was killed and this heavy defeat led to Louis being expelled from his base in the southeast of England. This event is known as “Lincoln Fair” after the looting that took place afterwards. The citizens were loyal to Louis so Henry’s forces  sacked the city, which was regarded as being pro rebel.

Lincoln Castle is still preserved and as the site of one of the extant copies of Magna Carta.

There is a further Normandy battlefield connection. Nicholaa’s lands included Folkingham, the site of one of the airfields used by the US 82nd Airborne division in September 1944 for their airborne landings in the Netherlands

For more information on visiting the battlefield of Lincoln, and other sites from the Barons’ wars contact British Battlefields.