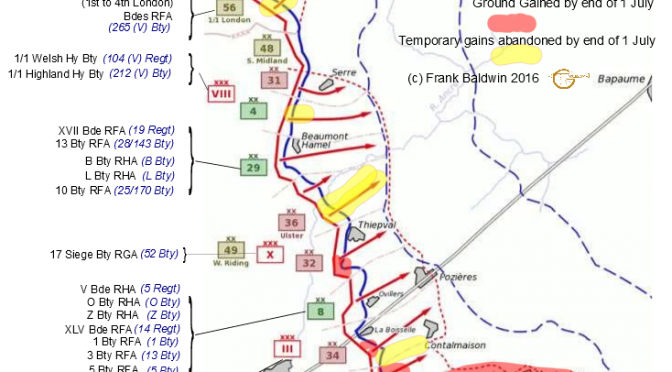 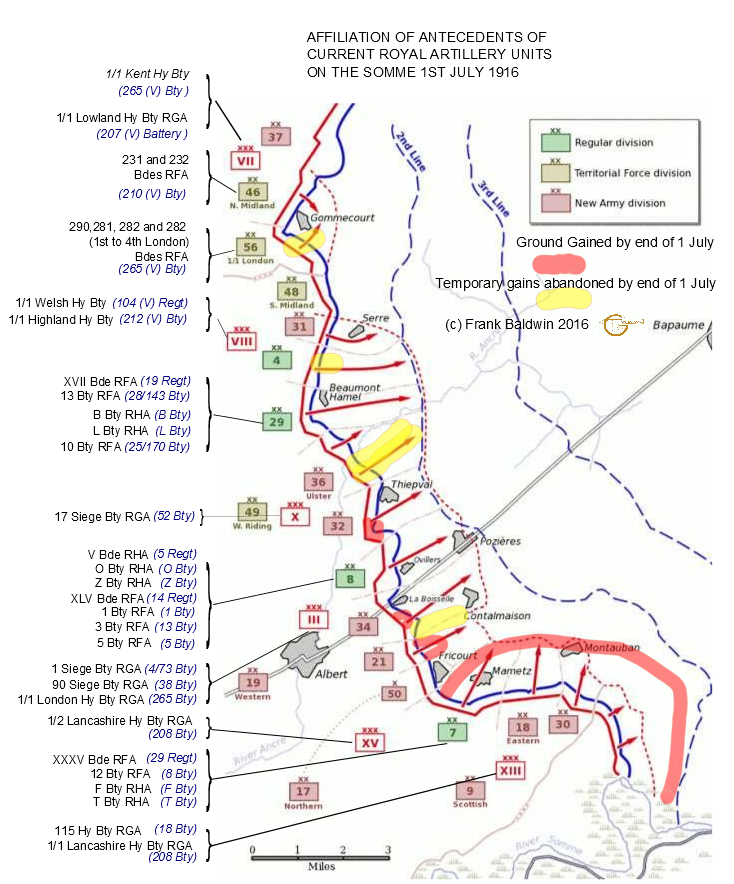 The Battle of the Somme was the largest, most bloody battle fought by the British Army. The popular image in Britain is of waves of foot soldiers going over the top into a hail of shells and bullets. But whether they succeeded often depended on how well the Gunners had breached then barbed wire, damaged defences, neutralised enemy batteries and neutralised enemy in the path of the infantry, and whether the infantry used the barrage.The Somme was an artillery battle, the first of its scale waged by the Royal Regiment. The artillery plan for the 1st of July assault was the first army wide artillery instruction. Within common principles and guidelines each corps developed its own fire plan.  In one sense the First Day of the Somme was a very big experiment with each Corps trying out a different technique for supporting the infantry.

The verdict was clear by the end of the day and the tactics used by the XV and XIII Corps, of heavy counter battery fire and a creeping barrage  became the norm for future attacks.

The majority of the BEF’s troops were “Kitchener’s” New Army Volunteers, raised for the duration of the war.However, many of the regular and territorial units which fired in the opening barrage and on the first day of the Somme are still part of the Royal Artillery.

The northern most corps, VII Corps of the 3rd Army was made by two Territorial Divisions, the 46th (North Midlands) and the 56th (London). 210 (Staffordshire ) Battery can be considered the descendants of the CCXXXI (231)and CCXXXII (232) (II and III North Midlands Brigades) recruited from Staffordshire

265 (Home Counties) battery might consider themselves associated with the territorial artillery brigades of the 56th (London) Division at Gommecourt. The Home Counties Territorials also formed the 1/1 (Kent) Heavy Battery with four 4.7” Guns, part of the 48th Heavy Artillery group supporting the VIIth Corps at Gommecourt, as was the 1/1 Lowland Heavy battery, raised from the recruiting area of 207 (City of Glasgow ) Battery.

The VIIIth Corps, was the Northernmost army corps in the Fourth Army. One of its infantry divisions, the “Incomparable 29th Division” formed from regular units serving across the world. This division fought in Gallipoli and in all of the major battles on the Western front from the Somme onwards. The part of the battlefield over which the 29th Division advanced is includes the preserved battlefield of Newfoundland Park, one of the most visited and photographed. One regiment and four current day batteries have antecedents which served with the 29th Division on the First Day of the Somme.

The XVII Field Brigade is still part of the Gunners, being renumbered 19 Regiment after the Second World War. One of XVII Field Brigade’s batteries, numbered 13 Battery in 1916 is still part of 19th Regiment, having been renumbered as 28 battery in 1947. According to the fire plan, this battery fired the artillery support for the doomed attack across Newfoundland Park.

B and L Battery RHA also were part of the 29th Division and fought on the first day of the Somme. XV Brigade RHA was formed from RHA units, but was equipped with the 18 pounder field gun and carried out the same function as a divisional field artillery battery. B Battery sent an OP party forward to support the capture of the Hawthorn ridge crater caused by the much photographed mine.

The heavy artillery of the VIII corps included 1/1 Highland Heavy Battery, part of 1st heavy Artillery group raised from the recruiting area of 212 (Highland) Battery, and 1/1 Welsh Heavy Battery, raised in Carnarvon. Both territorial batteries were equipped with four 4.7” guns.

To the right of VIII Corps was X Corps, which attacked the dominating ground around the village of Theipval. None of the field batteries of its new army and territorial had survived to the current day.

However, 17 Siege Battery RGA, the

recently disbanded 52 (Niagra) Battery was part of 40 Heavy Artillery Group which was the Northern Group supporting X Corps. The battery was equipped with four 30 cwt 6” Howitzers and fired on targets in the sector attacked by the 36th Ulster Division and commemorated by the Ulster Tower memorial.

The III Corps attacked either side of La Boiselle on the Albert-Bapaume road. This was the point of main effort of the Fourth Army. North of the road, the 8th Regular Infantry Division attacked towards the village of Orvilliers. Its artillery group included V Brigade RHA, now 5 Regiment, and XLV Brigade RFA renumbered as 14 Regiment in 1947.

As with XV RHA, V RHA Brigade, was equipped as a field brigade, there being a greater need for field rather than horse artillery in trench warfare. V Brigade RHA’s batteries included was O and Z batteries RHA.

XLV Field Brigade, which became 14 Regiment and three of its batteries have also survived. 1 Battery as “The Blazers”, 3 Battery RFA as 13 (Martinique) Battery and 5 battery as 5 (Gibraltar 1779–83) Battery. This divisions attack just north of the Albert Bapaume road towards Orvilliers also failed with heavy casualties

XV Corps was to the right of III Corps. One of its two assaulting infantry divisions was the regular 7th Infantry Division. The artillery group included XXXV (35) Brigade RFA, which still survives as 29 Commando Regiment, as does one of its batteries 12 Battery RFA, now 8 Alma Commando Battery as do F and T Battery RHA which served as part of XIV brigade RHA. The attacks by the 7th Infantry division were among the most successful of the day, due in part to the innovative creeping barrage fired by the artillery of the corps.

The attacks by the two New Army Divisions of XIIIth Corps were the most successful of the day.

115 Heavy Battery RGA, the current day 18 (Quebec 1759) Battery was also equipped with four 60 pounder guns as part of 29th heavy Artillery Group in support of the XIII Corps. This was the right hand British Corps in the attack on the 1st day of the Somme. Their counter battery fire was particularly effective, supported by additional French heavy guns and a factor in the breakthrough in the XIII Corps sector.

1/1 Lancashire Heavy Battery was part of 29 Heavy Artillery group supporting XIII Corps, This too was raised in Sefton Road, Liverpool.

The story on each Corps sector is different.  There are the personal accounts of the men who served the guns. And there is the story of how the Army developed the techniques learned at a painful cost to turn the Somme into the “Muddy Grave of the German army.”

If you would like to visit these places and see what the Gunners did on the Somme, there are still places available on the Somme Centenary Gunner Tour.

9 thoughts on “Where Were the Current Day RA Regiments and Batteries on the First Day of the Somme?”