The 3rd September was the 70th Anniversary of Operation Baytown, the landings by the 8th Army on the toe of Italy.  It was largely unremarked in the press, even in Britain.

Operation Baytown was the first landing in force by the western allies on the mainland of Europe.  The landing was largely unopposed and the Germans withdrew leaving blown bridges and felled trees. It has been overshadowed by the Anglo American landings at Salerno on the 9th September which faced  a week long battle before the Germans withdrew – as the 8th army drew close.

The Italian campaign lasted for twice as long as operation Overlord, the allied invasion of North West Europe, which overshadowed it.  The campaign cost the Allies around one third of a million casualties and the Germans over half a million, as well as an estimated 150,000 Italian lives.     The campaign included several controversial episodes, with the battles to prise the Germans out of their positions in the winter of 1943-44  giving rise to the battles for Monte Cassino and the destruction of the abbey and to the landing at Anzio.  The conditions around Monte Cassino were compared by several participants as reminiscent of the Western Front battlefields of the First World War.  Many commentators have been critical of Allied generalship in the campaign,  with US General Mark Clark and British General Harold Alexander singled out.

The value or otherwise of the actions and sacrifices of those who fought in the Italian campaign has been coloured by the counter factual debate about whether Italy should have been invaded at all.  From their entry  into the war in December 1941, the US Army Chief of Staff Marshal had been pressing for an allied  cross channel assault at the earliest possible opportunity and resisted British calls for activity in the Mediterranean.

This determination of the US Army to try to open a second front in Europe ASAP may have been influenced by several factors. 1) Europe was the only place that the huge 100 division US Army could be deployed. 2) If the Army did not put up a convincing argument that it would use the resources in a sensible time frame, the priorities would be switched to the US Navy or USAAF. It was politically unacceptable to argue “Germany first” while doing nothing for two to three years. 3) This was a coalition and the Red army, in 1941-43 looked as if it needed urgent help to defeat the Germans. The US army expected setbacks and to take losses and were prepared for initial failures. Their historic tradition and models were based on the US Civil War and “Bull Run” “Fredericksburg ” and Chancellorsville were part of a learning experience that led to Appomattox via Gettysburg and the Wilderness. The US had not been a major participant in WW1 and military planning could be quite callous by Western European standards.

Lets return to the C word. The US were part of a coalition, with the British as partners. The British were horrified at the risks the Americans proposed to run in 1942 and 43. (Brooke, who liked and admired Marshall, wrote of interrogating Marshal about what he wanted to do with a ten division landing in Northern France in 1942. What direction did he want to exploit? etc.) Brooke did not appear to grasp the scale and simplicity of the US plan: Mobilise and deploy 100 divisions to France where they can fight the Germans – France because that’s the only space big enough in Western Europe. If the first ten divisions were defeated there was another 90 and the resources of America mobilised for a crusade. This wasn’t an approach the British could afford to take. The British had already been kicked out of Europe on three occasions (France Norway and Greece), and were at the limits of their resources. To the British; the American plans all seemed to ask the British to deploy their last army in Europe on a series of risky ventures where the initial casualties would be disproportionately British.

Coalitions need to find plans which satisfy their partners or they fall apart. The compromise achieved by the Joint Chiefs of Staff of two democratic governments was remarkably effective. The solution adopted was very successful, and worked out far better than the US planners might have expected. There was simply no prospect of a successful D day until the U Boats had been driven from the Channel, which was not until May 1943. It is hard to see a 1942 D Day as anything other than a bigger version of Dieppe, which is also the likely fate of a 1943 battle for Normandy mounted with the troops available in Europe in July 1943 and Italy still in the war.

The historic development of the war worked out far better. The North African campaign allowed the US Army to be blooded where the geography and resourced favoured the allies. The setback at Kasserine pass was not fatal. The US could deploy and test a First IX (Eisenhower, Patton, Bradley, Truscott, etc) with manageable numbers of troops. The rest of the Tunisian campaign allowed the US Army the time to learn and apply lessons. A similar set back on the French coastline might have ended up with the entire army in the bag. The invasion of Sicily allowed the allies to try out the techniques they would need for Overlord, against a modest outnumbered enemy. Op Husky was a huge strategic success. It was cited by Hitler as his reason for abandoning his 1943 offensive in Russia (Op Ziterdelle) at a point where some commentators have argued that his forces were on the brink of victory.

The Italian campaign was a second front on the mainland of Europe. The invasion of Italy took Italy out of the War and opened a second front which absorbed a German Army Group of 20+ divisions and forced the Germans to deploy a further 20+ divisions in SE Europe to to take on the occupation activities undertaken by the Italian army. The Italian campaign was fought in a geographically remote peninsular, which enabled the allies to deploy a single Army Group of 20 Divisions into Europe without the Germans being able to mass the resources to throw the allies into the sea.

The troops involved in the Italian “side show” disproportionately damaged the Germans more than the Allies. The key battle for Op Overlord was to secure a lodgment area where the remainder of the US Army could be deployed direct from the USA – the Normandy campaign. The balance of forces available in the Normandy campaign was the result of a race to build up forces between the Allies using sea and air and the Germans, by road and rail. The Allies had a lot more troops , but could only limited shipping. The Germans had fewer troops in total, but it was easier for them to be concentrated. The allies won the battle for the build up and after an attritional battle lasting seven weeks the Germans ran out of troops to plug gaps and the Allies broke out. The 20+ divisions German troops in Italy and the casualties incurred throughout the campaign were not available on D Day in France to fight the crucial battle. Even if the troops of the 15 AG not been deployed in Italy, they could not have been used at the lodgement phase of Op overlord, because the number of troops was limited by shipping capacity. Even at the end of the Normandy campaign there were many US Divisions forces still waiting to be deployed. (E.g. (99th 100th & 106th ID 9th, 10th & 11th AD). If there had been no Italian campaign there would just be more US troops waiting to be shipped.

There is a parallel with the US Civil War. Arguably the war was won in the West, with the Confederate states split and dismembered by larger Union forces. The Eastern campaign, (and various incursions along the coast) however inconclusive, tied down CSA troops that might otherwise have made a difference on the West. Given that the Union had the preponderance of forces, it made sense to deploy on as many fronts as the CSA could be forced to deploy their smaller resources. 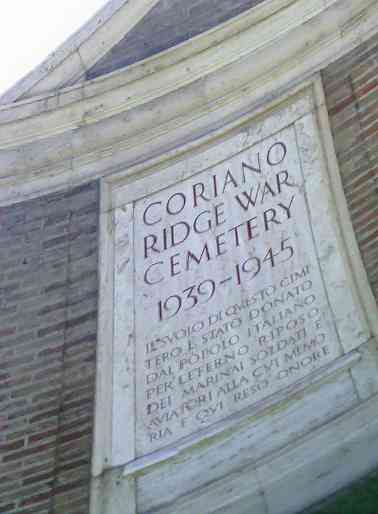 Instead of looking at the Italian campaign as a side show, it might be more constructive to consider it as a successful diversion, which succeeded in tying down Germans which might have made a difference elsewhere. it did not matter to the allies for this purpose exactly where they were fighting the Germans in Italy. Sure the air force wanted bases near Foggia, but whether the battle was North or South of Rome only really mattered to Mark Clark – and the Italians themselves. Whatever faults there might have been in the execution of allied operations around Monte Cassino, the overall aim was achieved. On D Day there were hundreds of thousands of German combat troops in Italy and even some en route from France. The battles around Monte Cassino played their part in defeating the Nazis and liberate Europe.

I think this might be a better way to remember the remember the sacrifices of the soldiers who fought and died in the Italian Campaign.