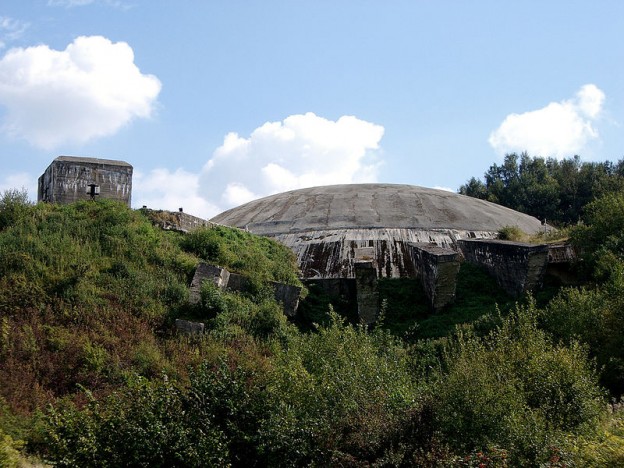 The war in the West was a race between the Allies and the Germans. Could the Allies mount D Day before the Germans had perfected a new generation of weapons which would terrorise Britain into submission. The German revenge weapons included the Fi 176 cruise missile, (the V1 flying bom), the A4 surface to surface ballistic missile (the V2) and a very long range gun, the V3.

Ever since the allies became aware of the existence of these weapons the Allied air forces had mounted a bombing campaign against the structures that the Germans were building to house these weapons. This campaign cost the allies 1,900 aircrew, a comparable number of fatalities to those lost on D Day.

On 3rd May 1944 the 8th USAAF Target was the the huge bunker at d’Helfaut-Wizernes, northern France. This vast structure was intended as a hardened launch centre for V2 and built with slave labour. This air raid was one of sixteen carried out by the allies air forces between march and the end of July 1944. 47 B24 Bombers of the 392nd Bombardment Group of the USAAF would drop 180 x 2000 lb bombs.

Briefing for crews was held between 0930-1000 hours. The mission was to be GH ship led with (22) aircraft carrying 2000# GP bombs. Despite fairly good visual bombing weather over the target with 3/lOths – 5/lOths cloud cover, bombing was poor with only a few hits in the target area of the (80) weapons released. While no enemy fighters were sighted, flak over the target was intense and accurate causing damage to (14) aircraft and wounding some crewmembers. No aircraft were lost and the mission recovered at base around 1740 hours after a 4 1/2 hour mission.http://www.b24.net/missions/MM050344.htm

The bombing by bombs of up to a ton in weight made no impact on the concrete dome, but wrecked the un-armoured facilites above ground, including the rail connections.

The bunker would be abandoned after a raid by 617 Sqn RAF :Lancasters and a on 17th July using six ton Tallboy bombs. Three of these exploded next to the tunnels, one burst just under the dome, and another burst in the mouth of one tunnel. The whole hillside collapsed, undermining the dome support, and covering up the two rocket vertical entry ways. The Germans abandoned the site in late July 1944.

According the the French Records, the ultimate fate of the 1,100 Russian slave labourers who worked site is not known.

The Bunker complex is now a museum, easily accessible from Calais and a day trip from the SE of England. Although the Germans never used the site for its intended purpose, the sheer scale of the building , the conditions under which it was built and its sinister purpose make it a thought provoking place. It is part of the V weapon story and the defeat of the V weapon bombardment of London. The story of the aerial campaign waged by the RAF and USAAF against the V weapon sites deserves to be better known.