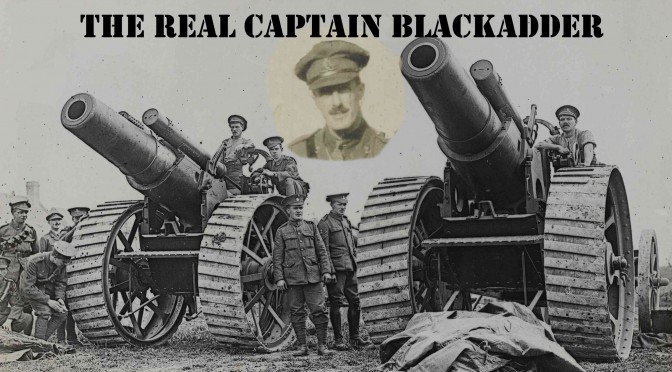 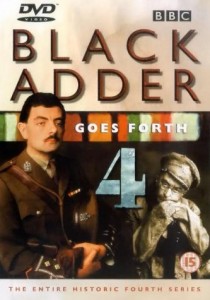 Blackadder goes Forth was the final series of the Blackadder BBC TV comedy programme. “The series placed the recurring characters of Blackadder, Baldrick and George in a trench in Flanders during World War I, and followed their various doomed attempts to escape from the trenches to avoid certain death under the misguided command of General Melchett.” The six programmes in this series were a satirical comedy set in the trenches of the Western Front. The characters were grotesque and funny, but the series ended with the poignant death of most of them in a hail of bullets in 1917, in slow motion with a final scene  cutting into a shot of a field of poppies.

This was the “Oh What Lovely War” version of the First World War, with a heavy handed moral slant, but it is also glorious comic satire. And being funny is one of the core values of the British Army.  Not the official Core Values of the British Army , which are  Courage, Discipline, Respect for others, Integrity, Loyalty and Selfless Commitment. All worthy ideals but they do not round out the character of the British Army. There are at least three other unofficial core values –“ Sense of Humour”; “BS Baffles Brains” and above all “Don’t get Caught” all come to mind.

There is a grain of truth in each episode of Blackadder Goes Forth. Starting with the existence of a Captain Blackadder in the Royal Field Artillery, as reported by the Radio Times in 2014.     The Imperial  War Museum (IWM) has a copy of his  diary.  This is listed as providing details of his service in 151 Siege Battery Royal Garrison Artillery. However, Peter Hart and Nigel Steel, both senior staff members of the IWM, record his unit as the 152 Battery – so I am not sure which is right. Both of these batteries were raised in Scotland, equipped with four 8″ Howitzers and deployed to France in August 1916.   Blackadder took part in the major battles from the 1916 battle of the Somme to the end of the war and his observations are a primary source for these battles. During this  time he rose from lieutenant to major and decorated for gallantry for organising the withdrawal of his guns , ammunition and stores under heavy fire.

The real Blackadder, with his accounting background looks a little more like Tim McInnerny’s  Captain Darling.

However, the extracts from his diary from summer 1917 in the 3rd battle of Ypres make it clear that he was far from a pen pusher with a paper-clip fetish.

The road to the new position is a mere apology for a road and as we are taking down the first gun at night the road surface collapses and the gun sinks to its cradle. It has lain there for three days now and we have not been able to shift it — two caterpillars failed to move it. Now we have had heavy rain so it is very doubtful if we will get the guns to their new place at all. The result of three nights’ work is to get one gun into a hole and another off to a workshop. Tonight I am to get the gun out of the ditch and another to the workshop if possible. The Hun shelled the battery all afternoon, broke another limber and badly damaged the road  again. About midnight he again shelled and set off more ammunition but all the men got clear. I got the gun out of the ditch with two engines and into the new position. It was difficult to get the gun away to the workshop owing to the road being cut up but we succeeded without mishap about 3 a.m.”

29 July (1917) At night, about 11 p.m., the old Hun began to strafe us and all around. The guns got it first of all so I ordered all to clear out. Then he worked up towards the fighting post, a concrete erection left by the Hun. Several of the gunners had come up here for shelter some very badly shaken. The shells were falling very near now, the concussion putting out the lights several times, then, all of a sudden, a tremendous crash and all darkness and smoke almost suffocating us — a direct hit on the post! We lit the candles again, but could hardly see for the smoke.

After ascertaining all were untouched I tried to get out, the shelling having moved to the guns again, but found the entrance blocked with debris. All wires had been broken too so we were out of touch with the guns and headquarters.  We soon worked a passage out and set to work to get into communication. Meantime some of the ammunition on No. 3 gun had been set on fire and the limber and stores were burning merrily: I got this gunner to come with me to put the fire out, this we did without mishap and returned to the concrete post. About 2 a.m. the shelling stopped and at dawn we reckoned up the damage done. Casualties, nil, material destroyed, very little. The fighting post was only slightly damaged and will stand many more hits thanks to the excellent work of` the Hun.”

Once again, it is ‘Der Tag’ and again we are nibbling at the Bosche line. Our Battery is busy closing up the Hun guns and during the day in addition to carrying out our programme during the attack, we received many calls from aeroplanes who saw Hun guns active. The Hun strafed the Battery area just before zero hour and broke all the communications to the guns, but we got these put right just in time. He did little damage though he hit No. 2 gun pit twice. During the day too, he endeavoured to neutralise the Batteries about our area with shrapnel and high velocity guns, but we got off with no damage.

If you want to visit the area where the real Captain Blackadder fought, or hear the  gunner side of the First World War, contact Gunner Tours www.gunnertours.com  info@ Gunnertours.com

1. Steele and Hart Passchendaele: The Sacrificial Ground – on e of the best histories of this battle, drawing heavily on personal accounts and one of the few that tells the story from the Gunner’s perspective.

2. https://livesofthefirstworldwar.org/lifestory/366252   The entry credited to Paul Evans look like the work of Firepower’s archivist