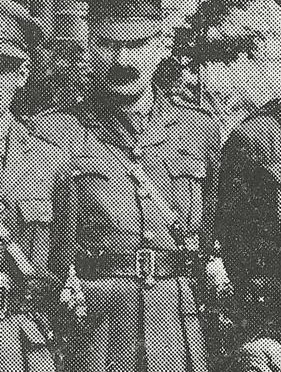 I recently took a group of businessmen on a visit to the battlefields of the western front.  One of them, Richard Whittemore, told me a fascinating story.  His great-grandfather was one of six brothers who served in the First World War.  Three of them died and are buried in France.   A fourth is commemorated on the Helles Memorial  in Gallipoli. 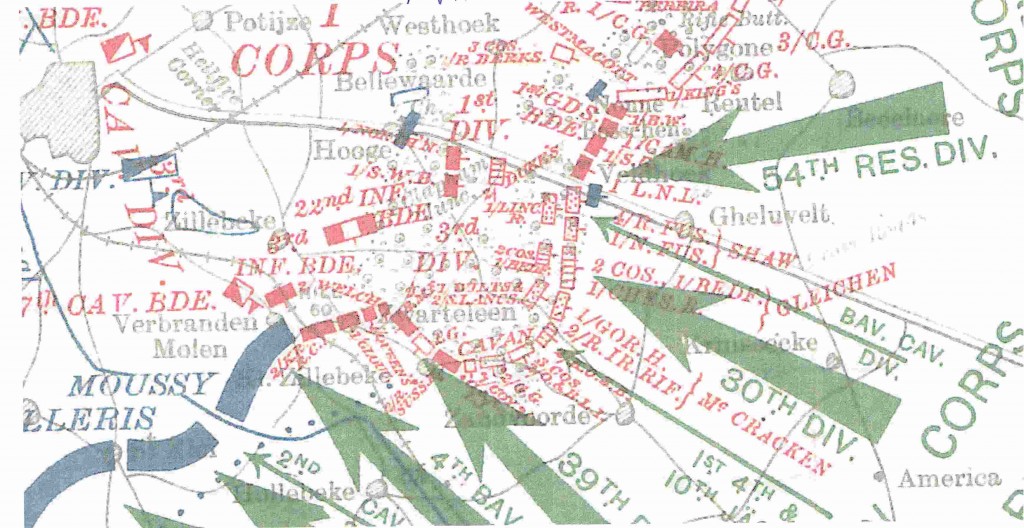 Sydney Whittemore was a regular soldier who served in the 1st Battalion of the Bedfordshire Regiment. This unit fought at Mons Le Cateau and the battles of the Marne and Aisne before deploying to Ypres. He died on 7th Nov 1914. The battalion had recently deployed to the trenches East of Ypres. According to the war diary, “Enemy broke through line held by Regt about 200 yards to our left, carrying next Regt & some of our men with them. Our supports were moved to left… & assisted in driving enemy back. Qr. Mr.Sergt. Byford [4893 Thomas William BYFORD, DCM] (awarded Distinguished C. Medal) collected about 40 men & captured trench held by 21 Germans, killing or capturing all. Pte. Falla [8095 William FALLA, DCM] (awarded Distinguished C. Medal) ran on in advance, & getting on left of trench enfiladed enemy whilst remainder were rushing the trench. Our casualties about 7 officers & 140 other ranks killed wounded 7 missing. It is likely that Sidney Whittemore was fatally wounded, as he is buried in Bedford House Cemetery, several miles west. 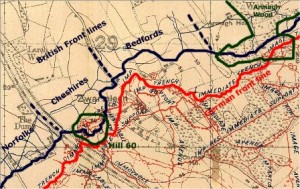 Frederick Whittemore was a hero. He joined the army, aged 18 in 1896 in the Bedfordshire Regiment. He served in the Boer War as a soldier. By 1914 he was Company Sergeant Major in the 2nd Battalion the Bedfordshire Regiment in South Africa. On 17th October he was commissioned in the field to replace the officers that had been lost up to that point. 2 Lt Whittemore was wounded on the 29th October 1914 in the first battle of Ypres. On his recovery he joined the 1st battalion and served with distinction in the heroic defence of Hill 60. As the sniper Officer he was credited with accounting for over 50 of the attacking Germans, but was wounded again with as bayonet. His actions resulted in the award of the Military Cross in December 1915. 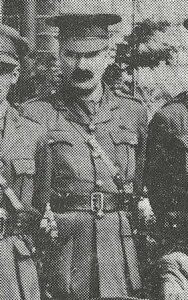 “Following twenty years of service in the regiment and having served through two wars, Lieutenant Whittemore, MC, was mortally wounded during a night patrol on 29 March 1916. His comrades tried desperately to recover his body, but despite several attempts, were unable to reach it. As a result, Lieutenant Whittemore is remembered on the Arras Memorial to the missing. “

It was soldiers like Frederick and Sydney Whittemore who epitomised the “Old Contemptables” of the BEF.

George Whittemore was a member of one of the first Kitchener Battalion of the Nottinghamshire and Derby Regiment which formed in Derby in 1914. It sailed for Gallipoli and landed at Suvla bay in August 1915. He was killed on 15th October 1915 but has no known grave and is commeorated on the Helles memorial.

Frederick Arthur Whittemore served in the 7th battalion The Royal Sussex Regiment died on 26th August 1918 aged 21. This gallant young soldier was killed in an attack on the Carnoy- Montebaun spur, almost on the 1st July 1916 front line. The attack in which he was killed seems to have been casually organised and ill supported, and as fatal to the assaulting infantry as any on the 1st July 1916.  The total advances was planned to be three miles. There was “some difficulty calculating the barrage, as the position of the leading troops of 35th Brigade was not known and it was not possible to arrange for the barrage to conform with the barrage of the 58th Division, (the other formation attacking.) . Divisional orders were not ready until 11 pm, and did not reach the commander of 36 Brigade until after midnight and 2 am before he could collect his battalion commanders to issue verbal orders for a 4 am attack, and there were three miles to march to reach the start point. Further delay took place in consequence of the late arrival of the pack mules with reserve small arms ammunition , and of shelling which forced the battalions to leave the road and march across wire and trenches on a compass bearing, the latter part of the way in single file.

Thus the 7th Royal Sussex (and 5th Royal Berkshire) were unable to reach the starting line in time to move off before 4.30 and 4.45 am respectively, and lost the barrage, which in any case dropped too too far ahead, nearly 1500 yards, to be of any use. Both came under machine gun fire. The Royal Sussex were held up in the valley in front of their first objective. The Germans spotted a gap between the two battalions and counter attacked, threatening part of the R Sussex near some old mine craters, (from the pre July 1916 front line). The fight went on all day until the neighbouring formation on the left captured a key village behind the German right at around 4.30 pm. (2) The CWGC records list 24 soldiers from 7th Royal Sussex who died between 26 and 28th August 1918. Three of these men, like Frederick Whittemore were recipients of the Military Medal. 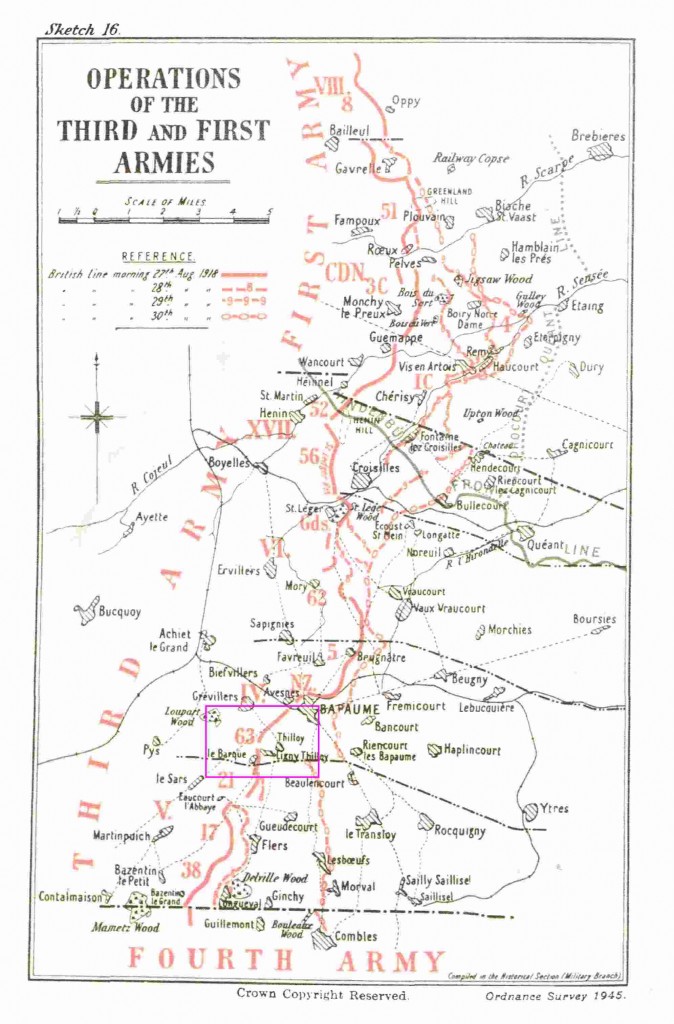 19833 Private C Whittemore of the 4th Battalion the Bedfordshire Regiment died , aged 23 on the 27th August 1918 and is buried in the AIF burial Ground Flees. He probably died in one of the two attacks made by 190th Brigade on Thilloy. 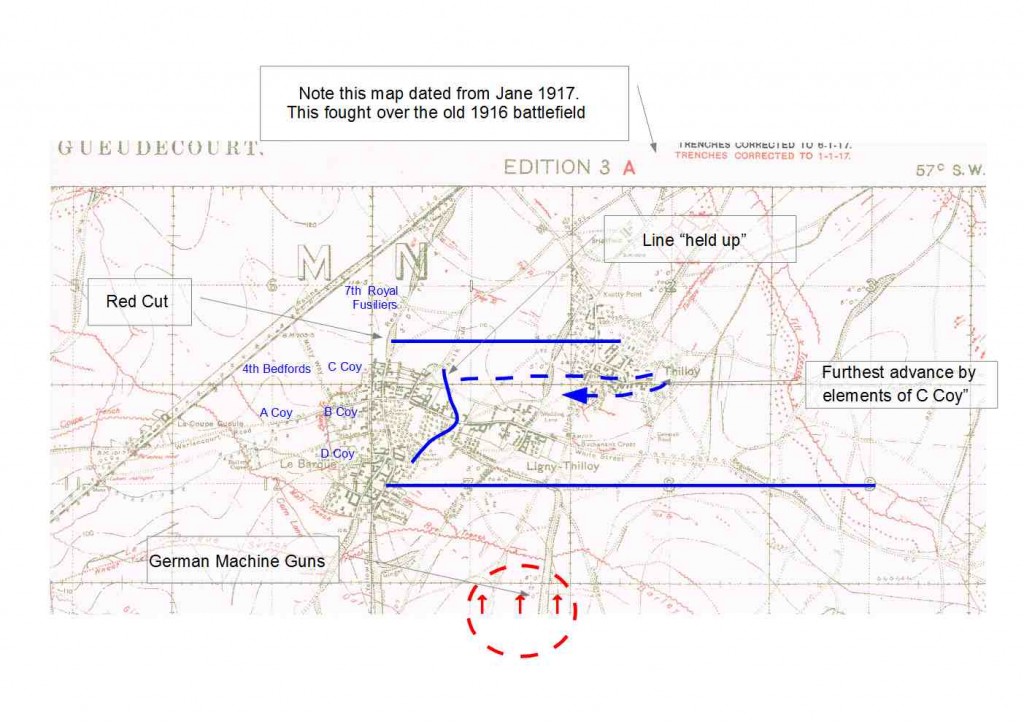 There is a report on this action here. ttp://www.bedfordregiment.org.uk/4thbn/4thbtn1918appendices.html

He may have served alongside Charles Laughton.

Richard’s grandfather survived the war. The medal cards list a Whittemore in the Bedfordshire Regiment, awarded the Mons star who survived the war. The family tradition is that he was a machine gunner, and suffered such severe shell shock that he spent the rest of his life in mental institutions. His family maintained a fiction that he had run off to India and married someone there. In fact he was incarcerated in a local mental hospital a few miles from where his children were growing up. He died and is buried in an unmarked grave. 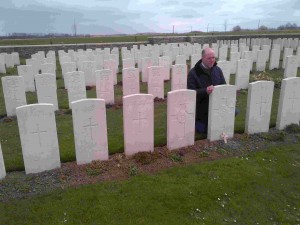 This was the result of some internet work and I am not sure exactly what the family relationships were.  However there seem to have been a lot of casualties, and medals awarded to a relatively small number of brothers or cousins.