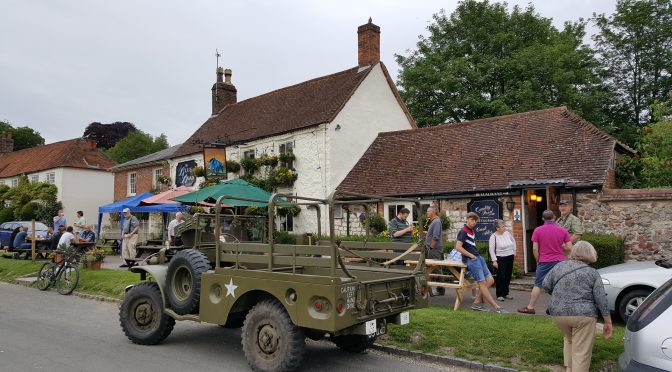 Earlier this month I had the pleasure of being the historian guide for the US National World War 2 Museum  “Band of Brothers Tour”. They are partners of the Liberation Route Europe. I accompanied the group to Aldbourne in Wiltshire, where the 506th Parachute Infantry Regiment were billeted in 1943-44. The Aldbourne Heritage society were splendid hosts.

Travelers were curious about the reaction of villagers to the influx of American soldiers doubling the population. One of the overwhelming thoughts must have been reminders to them of their own menfolk, doing their bit for the war effort far from home.

The names on the memorial plate in the church provide evidence of the war service of villagers. Most of those who served came back, and the memorial is merely a fragment of the part that Aldbourne played in the war. By the time that Easy Company arrived in Aldbourne many men were serving in one of the armed forces, and eight people from Aldbourne had already died.

At 00.45 hours on 17 Jan 1941 the unescorted M V Zealandic was hit underneath the forward mast by one torpedo from U-106 about 230 miles west-northwest of Rockall. The ship stopped for a short time, sent distress signals and then continued. The ship sank slowly after being hit amidships by more two torpedoes at 00.59 and 01.27 hours. The Germans observed how the crew abandoned ship in three lifeboats, but they were never seen again. The master, 64 crew members, two gunners and six passengers were lost. The passengers included 31 year old Wing Commander D. P. Lascelles RAF, and his wife Diana Trelawny,who lived on the Green, Aldbourne. Wing Commander Lascelles’ younger brother Flying Officer John Richard Hasting, had been lost over the Atlantic three month earlier, aged 20.

Two others died at sea before 1943. 17 year old Desmond Trevor Wooton was serving as a Boy 1st Class in the Royal Navy on 24th May 1941 aboard H.M.S. Hood when it was sunk by the German battleship Bismarck in the Denmark Straits between Iceland and Greenland. He was the youngest of the village war dead.

Commander Arthur Jelfs Cubison, (D.S.C. and Bar) RN was a naval hero. He was awarded the Distinguished Service Cross (DSC) as the Gunnery officer of the 770 ton destroyer HMS Tigress, when the Tigress and three other small craft gave chase to a German-Turkish squadron including the 22,500 ton battle cruiser Yavuz Sultan Selim (Ex German SMS Goeben) and 4,500 ton cruiser Midilli (Ex German SMS Breslau). Cubison showed marked ability, quickly straddling and hitting an enemy destroyer. Between the wars his career included service on river gun boats in Iraq during the Arab Rebellion in 1924 and ended with his retirement in 1934, after 21 years in the Royal Navy. At the outbreak of war, he re-joined the Navy and served at HMS Vernon, the Navy’s torpedo and mine recovery school. He took part in the evacuation from Dunkirk and was awarded a bar to his DSC. In 1942 he was the Captain of the 835 ton minesweeper HMS Niger. In fog on 5 July 1942, with visibility of less than a mile, he mistook an iceberg for Iceland’s North Western Cape and led six merchant ships of the Murmansk to Reykjavík convoy QP 13 into Northern Barrage minefield SN72 laid one month earlier at the entrance to the Denmark Strait. Every ship detonated British mines. 46 civilian crew and 9 Naval Armed Guards died aboard the American Liberty ship John Randolph, and the freighters Hefron and Massmar. There were only eight survivors of the 127 men aboard Niger. Only one freighter could be salvaged. An expensive accident and a tragedy for mariners who had survived the Arctic passage to Russia.

There is also a private headstone to Pilot Officer George Roxberry Bland, of 234 Squadron RAF who died on 16th April 1942, age 20, but his body was never found. His was one of two Spitfire aircraft from, 234 Squadron RAF probably shot down by German fighters as cover to an air sea rescue patrol off Cherbourg. Sergeant Robert Herbert Charles Crook of 45 Squadron RAF was lost on 18th April 1941 over the Western Desert. He has no known grave and is commemorated on the El Alamein Memorial in Egypt.

Sergeant Ronald Charles Barrett, 21, was the wireless operator of Lancaster Mk 1 R5573 ZN-B of 106 Squadron RAF, returning from a raid by 287 bombers on the city of Cologne when it was shot down at 01.53 on 9th July 1943, by a German night fighter over the Ardennes. He is buried in Heverlee War Cemetery near Louvin Belgium. There is a memorial in the Ardennes village of Harze to the crew of the aircraft. Two other Lancaster bombers were lost by 106 Squadron on the night of 8/9 July. One was flown by 1st Lieutenant Eugene Leon Rosner USAAF, from Wilkes-Barre Pennsylvania who had initially served with the RCAF before transferring to the USAAC in early July. This was the first mission in which Rosner flew in

USAAC uniform.  Rosner is buried in the Normandy American Cemetery in Plot A Row 3 Grave 38, above Omaha Beach.
During the period that Easy Company were billeted in Aldbourne before D-Day, three more men from Aldbourne would die. 35-year-old Captain Dermot Horace Thomas Hanbury, Royal Engineers died in India in January. Lieutenant Thomas Martin Francis Lowinsky of 1st Battalion Scots Guards died 16th February 1944, age 22, at the height of the fighting at Anzio, Italy. Sapper William Robert May, of 42 Field Company, Royal Engineers also died in the battle for Rome, on 1st June 1944, and is buried in Cassino War cemetery. He left a widow, Florence, in Aldbourne.
Easy Company’s campaign is entwined with the fate of Aldbourne’s war dead through the remainder of the North West Europe Campaign. Sapper Derek Thomas Brind died in Normandy on 24th August 1944, aged 24, and is buried in the Bayeux War Cemetery. Lieutenant Colonel

Thomas Irwin Bishell, DSO TD commanded the 94th (Dorset and Hampshire Yeomanry) Field Regiment Royal Artillery throughout the Normandy campaign. Born in 1899 he was a veteran of the First World War. He was awarded the Distinguished Service Order (DSO) for his inspirational leadership during the tough fighting south west of Caen during the first two weeks of July 1944. He met all emergencies with calm and resolute action and set an example of devotion to duty $rand contempt for danger. His regiment was part of the divisional artillery of the 43rd Wessex

Division which played an important role in Operation Market Garden. He was killed by a shell splinter on 1st October a dozen miles from where Easy Company made their attack on the same day. “Every single man in the regiment had the greatest confidence and admiration for him, and whenever he visited the gun position during lulls in the battle he always had a cheery word and smile for everyone.” Bishell is buried in Arnhem Oosterbeek War Cemetery.

Not far very far away, across the German border is the Commonwealth Reichswald War cemetery, which contains the graves of many RAF airmen, including that of Flight Sergeant Kingsley Osbern George Nugent, the Navigator of a twin engine Mosquito fighter bomber downed on 26th November 1944. He is buried alongside the Bahamian pilot, flying in the 305th (Polish) Squadron, an illustration of the patchwork of nationalities in the RAF. Easy Company’s route to Berchtesgarten passed within ten miles of the War Cemetery at Durnbach where Sergeant/Air Gunner Bernard Conrad Ricketts of 170 Squadron, Royal Air Force is buried after his Lancaster bomber was shot down in the last RAF raid on Nuremburg, Bavaria.

The British army in Burma is sometimes known as the “Forgotten Army.” But there were some 20,000 British soldiers who fought in the Chinese American Northern command under US General “Vinegar Joe” Stillwell. They weren’t “forgotten” because few people ever knew they existed! One of these men was Private Ronald Arthur Hacker, 6th Battalion South Wales Borderers, who died on 15th November 1944, age 25. At Gyobin Chauang on the road to Mandalay, his battalion fought a five day battle with the Japanese 128th Infantry Regiment in thick jungle. Hacker has no known grave and is commemorated on the memorial at Yangon(Rangoon), Burma.

The last Aldbourne fatal casualty of the war was Flight Lieutenant Guy Richard Brown, DFC RAF who died, aged 24, on 6th September 1945, three weeks after the Japanese surrender and is buried in Heliopolis War Cemetery, Cairo, Egypt. Brown was awarded the DFC for his service in 50 operational missions over Egypt and Libya leading to the capture of Tripoli. After then he seems to have flown for a electronic countermeasures unit in Britain against Germany. At the time of his death he was serving in an air ferry unit. The bus shelter was built as a memorial to him.

There is another name on the village war memorial, Sergeant Ernest Wakefield Royal Engineers. This name cannot be linked to any name in the Commonwealth War Graves Commission database. Village memorials were erected by the local parish and we may never know anything more about this man.
Of the seventeen names on the memorial, seven have no known grave. Their relatives would have received a message that their loved ones were missing, and that it was possible that they would be found or had been taken prisoner. Much later there would be a letter stating that their status was “missing presumed killed.” It must have been hard to hope that it was all in error, and that one day they would come home.
The Band of Brothers of Easy Company 506 PIR fully illustrates the experience of every and any American soldier in the liberation of Europe. Aldbourne is a village which can represent every and any English village. While every village has its own unique history and Aldbourne seems to have been the home of a higher proportion of officers than many, the war service of its villagers covers all three services, across the globe. The fortunes of war took many of them into contact with American servicemen in general and several of them even cross the paths of Easy Company. They all did their bit.