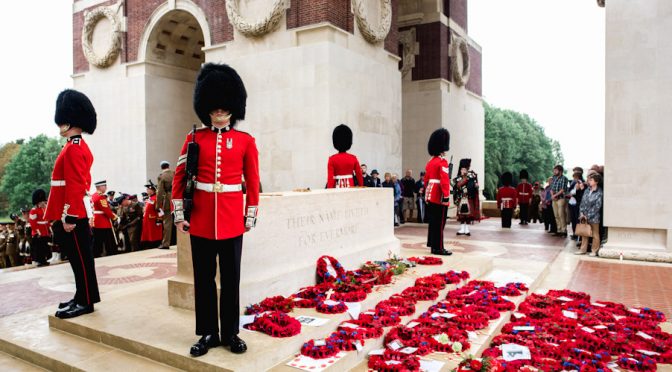 This November is the centenary of the end of the battle of the Somme, one of the battles selected to commemorate the First World War by the UK Government. One of the most impressive acts of Remembrance has been overlooked by the media and the public.  On 10th November on BBC Radio 4 General Tim Cross, reminded listeners that one reason for Remembrance is to learn the lessons of the past. One of the eternal, if pessimistic, truths is how rarely people learn from history. So it ought to be news when the armed forces actually do try to see what lessons can be learned from the past.  That is what the British Army did in mid September, entirely unremarked and ignored by the media.  This is a pity. Not only is is comforting to know that the sacrifices were not ignored, but many of the lessons uncovered ought to be considered by the politicians who set defence policy and the public who elect them.

The Army’s Operation Reflect Staff Ride Somme 2016 spent two weeks exploring the story of the battle of the Somme and learn the lessons for the current day. This was not a battlefield tour or a pilgrimage, but a serious professional study of the battle as a case study of the British Army in a war against a “first class peer enemy”, coalition warfare, development of tactics and technology, men in battle and supporting the army. It is very apposite to prepare for the worst, given the uncertainties of the current international situational politics.

This was a consultancy exercise involving some 200 Lieutenant Colonels, Majors and Warrant Officers mainly from the British Army, but with representatives from the French ,German, Commonwealth and US Armed forces, the RAF and the Civilian MOD. It was supported by battlefield historians from the British Commission for Military History, including the “OP” , and input from French and German historians.

The OP was struck by the fresh perspective from French and German historians. Even now much British military history written about the Somme ignores the French. The first book in English that sought to give anything like a fair balance between the British and French contribution to the battle was William Philpott’s “Bloody Victory” published as recently as 2010. The set text for the exercise was Dr Matthias Strohn’s “Somme Companion,” published for the exercise and featuring contributions from some of the historians taking part.

It was interesting to see the First Day of the Somme from the Belvedere de Frise, taken by the French 6th Army with only a fraction of the casualties suffered by the British further north, and to explore why this was. Few Britons, even professional historians are familiar with the capture of Bouchavesnes by the French in September 1916. Yet this high point of French endeavour on the Somme was the context for the first use of tanks by the British a few miles North West and a few days later.

This wasn’t just an intellectual exercise. The best part of a day was spent in acts of commemoration and Remembrance at the German cemetery at Rancourt and the Anglo French memorial at Thiepval led by senior British French and German general officers.

It was a pity and a surprise that there has been no media coverage of this huge exercise in remembrance and reflection. The public ought to know that our military institutions have committed serious time and effort to try to learn lessons from the past – real institutional Remembrance.