The Museum of the Great War, Pays de Meaux, is in the Town of Meaux, pronounced “mow”- to rhyme with “toe”. This, the first French National museum dedicated to the Great War 1914-19, is one of the big investments by the French government to commemorate the Centenary and cost 28 million Euros.

It is sited a short distance East of Paris, close to Disneyland, on the 1914 battlefields of the Marne. Close by are the places where French troops deployed by Paris Taxis. The BEF withdrew through Meaux towards the end of the long retreat from Mons. It’s a short distance from the sites of the scattered engagements that made up the 1914 battle of the Marne and not too far from where the French and American troops halted the Germans in 1918.

The battles that take place in the Marne are very important parts of the Great War. They are the turning points of the war, where the Germans were beaten back in 1914 and in 1918. There are narratives to be told about how the British Army saved Paris, France and Europe in 1914 and how the Americans saved Paris , France and Europe in 1918. It is also a place to hear about the French Army of 1914 and the battle to save Paris, to contemplate the French sacrifices for their country from 1914-18.

The Great War Museum at Meaux is very good as a “Museum of History and Society”. It is a museum about the Great War as seen by the French. It is not an interpretation centre for the battlefields in the area. It is based around the collection of Jean-Pierre Verney, which is particularly strong in the artefacts from the American Army, the AEF. It has a few big pieces of equipment, mainly selected to illustrate the contrast in technology between 1914 and 1918; pigeons and wireless, a Paris Taxi and a Renault tank. A lot of thought has gone into the interpretation, and I was particularly impressed by the way they have designed the exhibits to be experienced by the blind. Thus there are handling collections throughout the museum. Cases with manikins displaying uniforms and equipment are supported by statues extending out of the display case for people to feel the the shapes.

It’s not without its limitations. It is not geared towards telling the story of the British or Americans in France. and while exhibits are labelled in French English and German, there is no English language guide book or supporting materials for British or English speaking schools visitors. The collection lacks many of the kinds of pieces with historic provenance that are the highlights of the Imperial War Museum. It has no equivalent of the battered gun and limber from F Sub of L Battery, nor the gun served by Jack Cornwall.

One of the casualties of the battle was the French philosopher and poet Charles Péguy, killed in action on 5th September 1914 by German rifle fire near Villeroy. He is buried in a mass grave on the battlefield. One account says that he was killed because he would not take cover but stood up encouraging his men in the firing line. He was an established poet like Rupert Brooke. He had been a protester, socialist, anti-cleric, catholic, philosopher and poet. T. S. Eliot commended him as “one of the most illustrious of the dead who have fallen in this war,… a national, a symbolic figure, the incarnation of the rejuvenated French spirit.” It is claimed that he influenced Mussolini and Graeme Green. Much of his work has not been translated into English. Read more at http://en.wikipedia.org/wiki/Charles_P%C3%A9guy

If Charles Peguy was a special type of intense, intellectual Frenchman hard to envisage as a British hero, then David Graham Muschet “Soarer” Campbell is a Briton straight out of an Edwardian adventure story. A professional solider and amateur sportsman, he played cricket and polo well and won the 1896 Grand National riding “The Soarer”, from which he gained one of his nicknames. Twice wounded in the Boer War, he was the commanding officer of the 9th Lancers in 1914. On 24th August at Elouges, he led his Regiment in a charge over sugar beet fields in the industrial landscape outside outside Mons at the start of the Retreat. On 6th September 1914, the day after Peguy died, at Montcel 35km south east of Meaux, Campbell led two troops of the 9th Lancers to overthrow a squadron of the German1st Guard Dragoons, in what was the start of the BEF’s advance on the Marne. The Regiment’s doctor found Cambell “sprawled in a patch of clover a revolver wound in his leg, a lance wound in his shoulder, and a sword wound in his arm”. Despite this, Campbell told the doctor “I’ve just had the best quarter of an hour I’ve ever had in my life! Four months later Campbell returned to the BEF to command a cavalry brigade and was wounded a further time in May 1915 by the same shell which mortally wounded the poet Julian Grenfell. He survived his wounds to command the 21st New Army division on the western front, as a far from stereotypical British general officer.

The Marne area was never as devastated as the Somme, Aisne or Artois and many of the villages retain buildings from the time. One of the village cemeteries has the loopholes where the soldiers of the 45th Algerian Division fortified themselves. It is easy to see how the fighting unfolded. The fighting in the Marne was very different from the trench warfare that is normally associated with the Great War. It was a war of manoeuvre and cavalry charges. There are great stories about the people who fought that can make this tale of interest to a general British or American audience. But it needs a battlefield guide who can bring history to life from a British or US point of view. 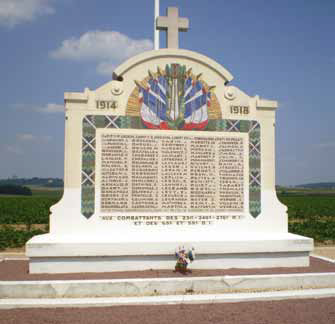