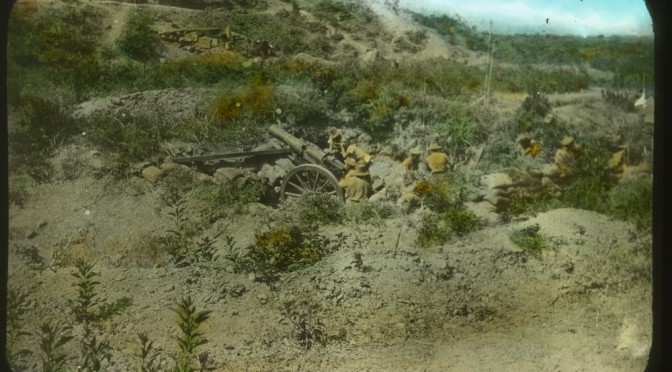 25 April was the anniversary of the landings on the Gallipoli peninsular. It has become synonymous with the Australian and New Zealand forces, the ANZACs.  This was the day when the forces of these dominions first played a significant role in military operations. Gallipoli; in particular ANZAC Cove has become a place of pilgrimage for antipodeans commemorating  the endeavours and sacrifices of the antipodean dominions.

But the ANZAC corps which fought in Gallipoli was not just made up of Aussies and Kiwis. British and Indian gunners also served in it. The Corps comprised the 1st Australian Division and the Australian and New Zealand Division. Neither included as much artillery as a British infantry Division. The 1st Australian Division included three artillery brigades, each of three four gun batteries equipped with 18 Pdr field guns, a total of 36 x 18 Pdr guns. The Australian and New Zealand Division’s artillery support was the 1st New Zealand Artillery Brigade with twelve 18 Pdr guns and a howitzer battery of four 4.5” Howitzers. By comparison a British infantry division was supported by fifty four 18 Pdr guns, eighteen 4.52 Howitzers and four 60 Pdr guns. The ANZAC Corps had less than half of the artillery that supported comparable British formations. 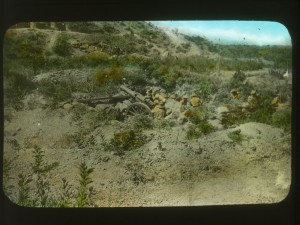 It was particularly short of howitzers capable of lobbing high explosive shells over hills and into trenches. Almost all of its guns were 18 Pdr guns with a flat trajectory and very difficult to deploy in the hills inland from Anzac Cove. Often the way to enable the guns to engage was to run them forwards with the infantry in the direct role. These guns were supplied solely with shrapnel shells which was almost useless against troops in trenches. Although the Allies could call on the support of the naval guns of the fleet, these too had a flat trajectory and could not be easily brought to bear onto Turkish positions among the hills.

At least three other Imperial gunner units were brought in to support the ANZAC Corps to redress this deficiency. Even so, the expeditionary force as a whole was never supplied with the level of artillery support, either in the number of guns or ammunition that was found necessary to support a successful attack.

The two batteries which formed the brigade: 1st (Kohat) Mountain Battery and 6th(Jacobs) Battery are still in existence in the Pakistani Army.  These were equipped with the BL 10-pounder Mountain Gun. This was a 2.75 inches (69.8 mm) calibre gun, which lacked a recuperator or recoil system. It could be dismantled into 4 loads of approximately 200 pounds (90.7 kg) for transport, typically by mule. It could fire a shrapnel round or common shell. This was a shell filled with a low explosive such as gun powder. As a whole this was a weapon better suited to colonial warfare than a C20th battlefield. It was deployed in sections of two guns, as can be seen in the sketch map.

Major Ferguson, (known to the Australians as “Percussion Sahib”) commanded the 21st Mountain Battery.   He met Colonel Sinclair-Maclagan, commander of the 3rd Infantry Brigade on the morning of the 26th April . ‘I found him at last, plumb in the middle of the firing line and asked where he wanted artillery support….  He waved his arm through a semi circle and said everywhere around there. I selected a gun position pretty high up and ordered up the battery. After a long interval a very heated subaltern arrived with a couple of gunners carrying wheels and said that all the loads would have to be carried up as the ground was very steep and sodden with rain, and the mules weak, and that we could not possibly have  four guns in action in under an hour… We got into action at last and began shelling movement on the chessboard, while two guns began shelling us… The Australians were very polite about our assistance that day, as always.”  Within three weeks the 7th Mountain Brigade unit needed 75 replacement soldiers.

The 1/4 Lowland Brigade RFA, (4th City of Glasgow) equipped with 5“ Howitzers was transferred from Cape Helles to support the ANZAC Corps at the end of July 1915. This was a territorial unit whose heritage and traditions are maintained by 207 (City of Glasgow) battery RA, who hold what is believed to be the breech of the gun which fired the last rounds on the Gallipoli campaign.

A lone 6” howitzer, under the the command of Regimental Sergeant Major David Hepburn with a Royal Marine Artillery detachment was deployed ashore in mid May and attached to the New Zealand Artillery Brigade. His gun had been deployed on the battleship HMS Prince George, which was damaged below the waterline by a shell on 3rd May. “We had to fire over two successive ridges each 400 feet high at a target only 1,300 yards away. We could not see the target. We had the sea at our backs, and that was the only direction in which we did not fire. On one occasion we fired in one direction, then turned the gun round completely and fired in the other direction. One afternoon we received a message “engage enemy heavy gun!” Out came the map and from the map we laid our gun. It pointed bang over our won headquarters! It is ticklish work when the shells only just slither over the crests and when the target is only 30-100 yards from our own trenches. I never did get over the idea of firing so close to our own men.(2)

Several of the artillery commanders in the ANZAC units were Royal Artillery Officers. Brigadier Charles Cunliffe Owen CBE was Brigadier General RA of the ANZAC Corps. A South African War veteran he had commanded 26 Brigade RFA in 1914 in the Retreat from Mons and the battles of the Marne and the Aisne and the 2nd Infantry Brigade in Ypres.

The CRA of the Australian and Zealand Division was Lieutenant Colonel G N Johnston RA. He was born in Canada but schooled in Scotland and commissioned through Woolwich. Johnson served

throughout the war as CRA of the New Zealand Division receiving the CMG and DSO and mentioned in dispatches eight times.

The CRA of the 1st Australian Division was Brigadier Talbot Hobbs, an Australian architect and militiaman who ended the war succeeding Monash as the GOC of the Australian Corps. His senior staff officer, Brigade Major Royal Artillery (BMRA) was Major Stuart Anderson, a British Regular Officer. Educated at Westminster and Clare College Cambridge. Major Anderson was appointed as the Instructor in Gunnery for the Australian Commonwealth forces artillery in 1912, and in 1917 he became CRA of 1st Australian Division.(3)

Gunner Tours is happy to provide subject matter expertise for any group seeking to understand the Gunner side of the Gallipoli Campaign.