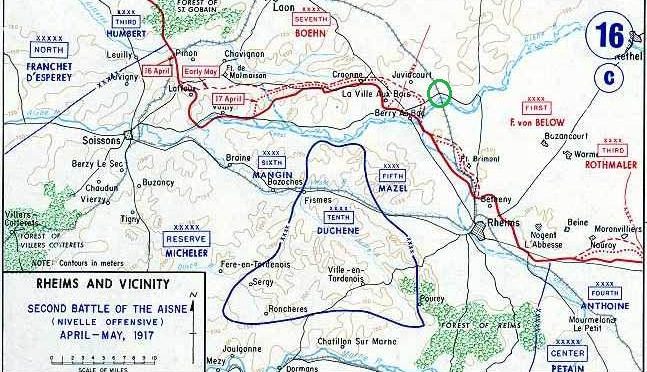 16th April 1917  marks the centenary of one of the most important battles of then First Wold War.   Overshadowed in British public consciousness by the Somme and Passchendaele, the battles of spring 1917 are better remembered in Canada and Australia. The battle of Arras was part of an Anglo French offensive.  The aim was to break through the German lines using proven techniques for combining artillery and infantry learned from the Somme and Verdun. The British and French started with high hopes, but the offensive cost 350,000 casualties in six weeks, without demonstrable results. Subsequently the French Army mutinied  – or rather went on strike.

By late 1916 the French government had become dissatisfied witch their generalissimo  Marchal Joffre , the savior of the Marne.  Joffre for the last three years Joffre had had advocated a concerted attack by the allied armies.  This had cost  France two million casualties.  The French sought a new commander in choice and selected a relatively junior officer – Robert Nivelle.  Nivelle had distinguished himself in command of an artillery regiment, infantry brigade, division, corps and then army over two years. He was the hero of Verdun  who had recaptured Fort Douamont and Fort Vaux.

Nivelle thought he had solved the problem of attacking trench lines.  He offered a solution that would end he war in one stroke and defeat the Germans on the western front, with minimum casualties. An idea that offered to make the omelette without breaking eggs was timely and attractive.  However, not all were convinced.  A new War minister Painlevé appointed in March 1917 was deeply skeptical of a plan that looked too good to be true.  Many senior military officers, including of Nivelle’s subordinates and former superiors, pointed out that the plan could not deliver the promised benefits, ignored practical difficulties and would cost far more than projected.   However, Painlevé could not obtain enough consensus to call of the idea in  the face of popular and media support for an ideas that appeared to allow France to  have their cake and eat it.  It is a story with a modern relevance.

The following text has been taken from the entry in the British Army Guide to the Battlefields of the First World War  published in 2014.

The French army mutinied. Petain was appointed to restore order and confidence. The French Army undertook no further offensive operations until July 1918. The Germans obtained the objective sought from the battle of Verdun. They had an opportunity to beat Russia, Italy and Britain in turn before the US mobilised.

At the end of 1916 the French and British governments, found the advice of Haig and Petain that the war could not be won quickly or without further heavy casualties unpalatable. French General Robert Nivelle, a hero of Verdun, claimed that the Germans were exhausted. A violent surprise blow would rupture the German lines and achieve a decisive breakthrough in 48 hours. The allied governments appointed Nivelle as supreme commander, subordinating the BEF to the French temporarily. The British would strike near Arras and on the Somme to draw the German reserves. The French Army would attack north on the Aisne with a surprise attack using massed tanks and artillery. In February the Germans withdrew from the 1916 Somme battlefield to a shorter fortified position; the Hindenburg line. This disrupted allied plans and released German troops. 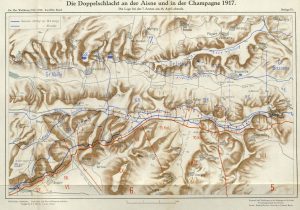 The E-W limestone ridge between the Aisne and Ailette is known as the Chemin des Dames and has been of tactical significance since ancient times. Both Caesar and Napoleon fought battles in the area. Further South East the front lines stretched into the Champagne plain East of Rheims where the Moronvilliers Hills dominated observation. The River Aisne was an obstacle to movement, as was the damage caused by the bombardment.

The German positions had been occupied since September 1914, strengthened using the “Caunes” (underground quarries), and improved by extensive tunnelling. Their deployment was based on the “Conduct of the Defensive Battle” (Dec 1916). Instead of fighting the main defensive battle in the front line, the main fight was to take place behind the front line, out of view and out of range of enemy field artillery.
North of the Aisne, at the centre of the main effort of the attack the Germans outpost line was along the Chemin des Dames Ridge while their main position was in the Ailette valley on the reverse slope. The Germans kept a proportion of their troops back to counter attack.
The French planned to attack on a 65 km (40 mile) frontage North of Rheims, with a subsidiary attack east of Rheims, between Prunay and Aubérive, along the Moronvilliers Hills. On the Chemin des Dames the French deployed an artillery piece every 20 metres. The French infantry were expected to follow a creeping barrage which advanced at 100m per minute. The Fifth Army would attack on the Western half of the Chemin des Dames, with the colonial Corps attacking from the West. The Sixth army would attack the right hand side and NE across the plain North of Rheims. The phase lines anticipated an advance of 10km on the 1st day. The anticipated breach would be exploited by a fresh army and 128 tanks. The following day the 4th Army would attack in Champagne. The French placed particular faith in the élan of their African troops, which formed two of the assault corps in Mangin’s 6th Army, which was also reinforced by British heavy artillery. Three brigades of post revolutionary Russians attached to the 5th Army voted to take part in the attack.
Many senior commanders had misgivings and only relented after Nivelle promised to cancel the operation after 48 hours unless a breakthrough had been achieved. Nivelle’s optimism and promise of success spread among the French troops who appear to have approached the battle with confidence.
French security was lax. The offensive was discussed in the media. German raiders captured operations orders. The two week long preparatory bombardment eliminated any residual uncertainty. The Germans reinforced the sector, doubling the number of divisions and batteries.

The Preliminary Bombardment 2-15 April 1917. The preparatory bombardment was hampered by the weather and the aggressive German fighter force, which hampered the French use of aircraft to direct fire against reverse slope positions. Despite the number of French artillery pieces, the German positions were too deep and extensive for the bombardment to be effective. By the eve of the attack the wire had not been consistently cut and the level of devastation were visibly less than that seen on the Somme and Verdun battlefields. The majority of Germans waited underground.
16th April 1917 H Hour was 06.30. The weather was cold wet and very windy and the infantry froze waiting for the assault. Far from advancing at a rate 100m per minutes deep into the German positions, the French struggled to get beyond the German first line in the face of machine gun and artillery fire. The barrage advanced uselessly away from the infantry. The Germans counter attacked, and in some places reappeared from shelters and tunnels behind the attackers. H Hour for the 1st colonial corps, due to attack on the extreme left had been delayed by three hours to minimise the risks of friendly fire from the anticipated breakthroughs the south and the Western faces of the Chemin des Dames position. The Senegalese managed to capture the Mont de Singes with the support of British Artillery, but were forced to withdraw.
The Fifth army had more success. In the Juvincourt sector where the attack was supported by tanks, the French penetrated to the German second line.. The 14 ton Schneider tanks were restricted by their poor cross country performance to a narrow line of advance and came under concentrated artillery fire. Most tanks were knocked out or broke down before they reached the German lines.
17th April – 15 May 1917 . The Sixth army was to capture the remainder of the Chemin des Dames and cover the success of the Fifth army. The appalling wet weather persisted overnight and prevented artillery preparation. Further attacks were called off while the French hung on to their gains. The Fourth army in Petain’s army group attacked, penetrating the German line to a depth of 500m-2.5km. These gains were developed methodically, seizing the crests of the Moronvilliers hills. The Germans launched costly counterattacks to try to recover them.
Despite Nivelle’s earlier promise, he pressed for the operation to continue with limited tactical objectives. The Tenth army was deployed to seize commanding features on the Chemin des Dames. On the 18th the Germans pulled back from the Chemin des Dames, losing heavily during this movement. the French continued to make small gains during the rest of April and into May.
By this time Nivelle had lost the confidence of the government and his subordinates. Petain was appointed, initially as Nivelle’s Chief of Staff on 26th April and then in his place as GoC on 15th May.

The first mutinies began on the 4th May peaking a few weeks later and continued with diminishing levels until January 1918. Despite individual acts of insubordination, these were effectively strikes, with units refusing to take part in offensive operations. Petain took measures to suppress the mutiny, imposing discipline and arresting ring leaders. 48 mutineers were executed. He also addressed grievances and improved the administration of soldiers, such as regular leave and improving the quality of food. He then initiated a series of minor attacks to restore the French army’s confidence. The French Army was in no condition to take the offensive for the remainder of 1917. The Germans do not seem to have been aware of the French Mutinies.

At Verdun Nivelle enjoyed adequate and successful artillery support, surprise and limited attainable local objectives. None of these featured on the Aisne. Nivelle offered British and French politicians a solution which was politically acceptable rather than militarily achievable.
As “Application of force” (1985) concludes, “the attack demonstrates what may happen when soldiers already jaded by two and half years of war, are buoyed up with promises of a cheap and quick victory only to have their hopes dashed and their morale shattered by an unexpectedly bloody reverse. The aftermath shows how firm and understanding leadership can repair the damage to an army’s spirit.”
In pure material terms the battle might be considered a moderately successful attrition battle. French losses were heavy, but no worse than in 1915. They gained more ground and, according to official figures inflicted proportionally heavier German losses a higher proportion of prisoners than for the first month of the Somme.
The Nivelle offensive achieved for the Germans everything they had hoped for their attacks on Verdun the year before. As a result the Germans had the time to impose their terms on Russia and the opportunity to force Italy and Britain out of the war

Much of the Chemin des Dames was designated as devastated land and turned over to forestry, preserving the trenches, bunkers and munitions. There are interpretation panels and monuments in many of the key locations. The battlefield is largely the same ground as the British Aisne battlefields of 1914 and 1918.
The Cave au Dragons museum is an underground battlefield and offers interpretation and local guides.
There are several memorials on the Chmein des Dames road commemorating different French units, including the Senegalese and the Basques.
The destroyed village of Craonne has a symbolic significance, as the subject of the bitter anti war song the “Chanson de Craonne”, banned in France until 1974.
The evocative adjacent French and German cemeteries at Cerny-en-Laonnois, on the crest of the Chein Des Dames, on what would have been the German front line. They contain the graves of 7,526 Germans 5,150 French and 54 Russian soldiers

To find out more about why Nivelle was promoted, check out this post In Defence of Robert Nivelle