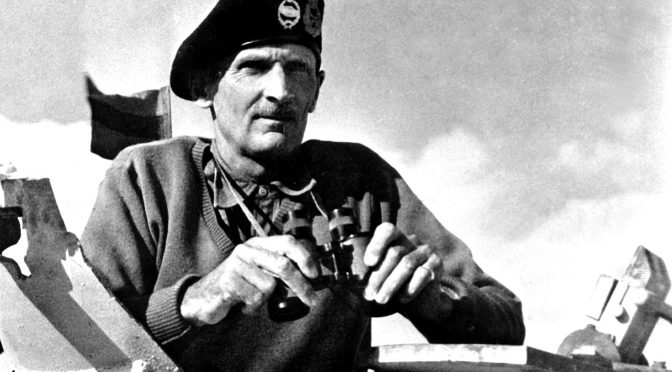 1. HIS MATERNAL GRANDFATHER WAS A FAMOUS CHILDREN’S WRITER

His maternal grandfather, Dean Farrar was a famous preacher and author. Montgomery’s mother was the daughter of Dean Farrar, who was a well-known theologian who could fill a church when it was known he was preaching. He was master at Harrow and headmaster of Marlborough schools. He spent much of his clerical career at Westminster Abbey becoming archdeacon as well as a chaplain to the royal household. He wrote works of theology and several works of fiction, including Eric or Little by Little. This tale set in a school that was one of the best-known boys books in mid Victorian England. 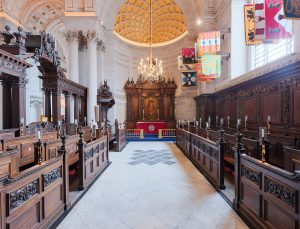 2. HIS FATHER : KINDLY CALL ME GOD

The is a substantial memorial to Montgomery’s father Henry Montgomery in St Paul’s cathedral. After his return from serving as Bishop of Tasmania, Henry became the Prelate to the order of St Michael and St George. It was during his time in office that order was given their chapel St Paul’s Cathedral on the south side of the nave, which is a memorial to his serv ice. Henry was made a knight commander of the order of St Michael and St George in the king’s birthday honours of 1928. He became a KCMG – known as “Kindly Call Me God.” Each member of the order has a brass plate in the chapel.

3. HIS COMMANDING OFFICER DESERTED HIS BATTALION  IN BATTLE

In Monty’s first battle, his commanding officer deserted Montgomery and half the battalion on the battlefield of Le Cateau.  At the end of the battle they escaped the Germans by marching among the German columns undiscovered. Lieutenant Colonel John Elkington was court-martialled and cashiered for deserting his men, and surrendering a post at Sant Quentin. Elkington eventually redeemed his honour. He joined the French Foreign Legion as a private soldier. When his platoon commander became a casualty Elkington rallied the men and led them in an attack in which he was badly wounded.

4.  IT WAS A  STUDENT PUNISHMENT TO SIT NEXT TO  MONTY AT BREAKFAST

Montgomery was an argumentative and garrulous student at Staff College. According to the recollections of one student, one student was sentenced to sit next to Monty at breakfast for a week.  In its conundrums page the college magazine posed: “If it takes ten truck loads of 9.2” Mk V star India pattern to stop one bath on the second floor of the staff college from leaking, How many haynets with full echelons will be required to stop Monty burbling at breakfast.     its had a page of “Things we would like to know” one of them was “If and where does Monty observe two minutes silence on Armistice day?” 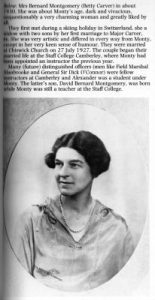 Monty met many artists of the 1920s through his wife Betty. She was a graduate of the Slade Art School. Her home at Chiswick as a meeting place for many “bohemians” such as AP Herbert, Eric Kennington and Augustus John.

In 1929 Major Montgomery wrote the infantry tactics text-book. Infantry Training Volume 2 War. He knew and had written Basil Liddell Hart, the author of the previous edition. Liddell Hart fell out with Montgomery over the omission of some of Liddell Hart’s favoured ideas, the Expanding Torrent approach to pursuit.

7.  CRUISING WITH THE ARCHITECT OF THE REICHSWEHR

In 1934 Lieutenant Colonel Montgomery and his wife took a cruise to the far east. One of the passengers on the same cruise was German General von Seeckt, the architect of the German Reichswehr. Montgomery interrogated the German at some length about his ideas through an interpreter.

8. MONTY THE SMOKER AND DRINKER

Famously a tee total non-smoker, Montgomery drank and smoked in moderation until 1939. However in June 1939 Montgomery was invalided back to the UK from Palestine with pleurisy. On his recovery he gave up drinking and smoking.

In 1940 a sex scandal, or rather sexually transmitted disease)  threatened to engulf his wartime military career. As commander of the 3rd Division Monty became concerned about the prevalence of venereal disease in his 3rd Division. He wrote an order ordering commanding officers to make condoms available on sale in the NAAFI and ensure that sexual hygiene was promoted. “My view is that if a man wants to have a woman let him do so by all means, but he must use commonsense and take all precautions.”  Nothing ot frighten the horses in the 21st century,  but not in the mid C20th for an army of national servicemen. It never occurred to Monty that this was a subject left or the medical services.  Lord Gort the commander of the British Expeditionary Force demanded that Montgomery publicly retract the order, which Brooke, the corps commander thought would have left Monty;’s position as commander untenable. His Corps commander Alan Brooke persuaded Gort to allow Brooke to deal with Monty. 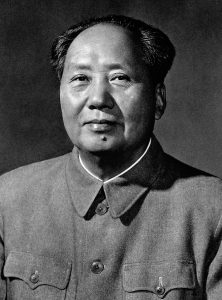 After writing his memoirs Montgomery undertook a self-appointed role as a mediator for world peace. He obtained invitations from the Soviet and Chinese leadership. He met Nikita Krushchev in Moscow and Chairman Mao-Tse Tungin China, seven years before Nixon’s historic visit. Monty swam in the Yangtse river with Mao, enjoyed the meeting enough to invite Monty for a second visit and composed a poem for him entitled “swimming.”

11. WOULD BE MIDDLE EAST PEACE ENVOY

At the 25th Anniversary of El Alamein, four months after the six day war, Monty offered his services to President Nasser of Egypt as a personal emissary to broker a peace between Egypt and Israel.

If you would like to visit some of the sites associated with Bernard Montgomery, I am organising walks and talks.