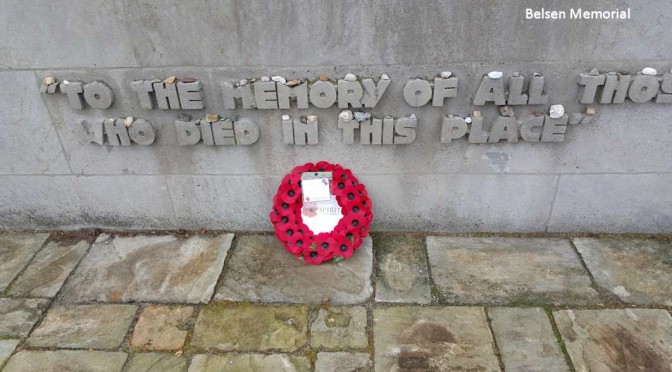 What did you do in the war daddy? Gunners from 113 Light Anti Aircraft Regiment could truthfully answer – “We helped to save tens of thousands of lives.”

113 Light AA Regiment Royal Artillery was originally raised as 2/5th Battalion the Durham Light Infantry, converted to a Searchlight battalion RE before the Second World war, and then to a Light AA Regiment in 1941.

In June 1944 it landed in Normandy as part of 100 AA Brigade and defended the bridges over the Caen Canal, including Pegasus bridge and the gun areas north of Caen. In September 1944 it took part in Operation Market Garden, taking over responsibility for defending the Bridge at Nijmegen. After a cold winter in the Netherlands and Belgium it provided air defence for the bridge over the Rhine at Xanten. 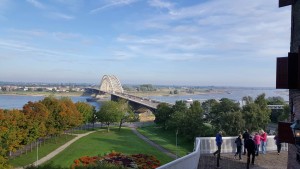 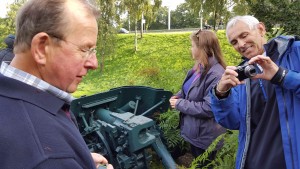 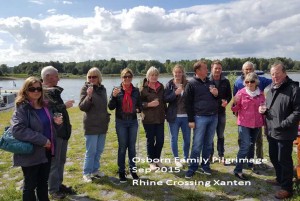 By 16th April 1945 German air effort was weakening and the Regiment came out of action into a concentration area near Haldern East of the Rhine. The Allied spearheads were rapidly advancing through Germansy and the Red Army had surrounded Berlin. It might reasonably expect to have little to do until demobilised. 113 LAA the Regiment’s service was not untypical of any Light AA Regiment It had done its bit.

But things changed with the orders the next day to move to administration duties at Belsen Concentration Camp (42 miles North of Hannover) under command 10 Garrison, taking over from 63 Anti tank Regiment. 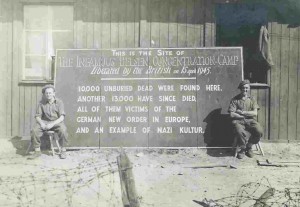 Captain Pares, the Adjutant of 113 LAA wrote the following:-
“On 12 April 1945 following the break-through of Second Army after the Rhine crossing, the German Military Commander at Bergen-Belsen (Chief of Staff 1 Para Army) approached 8 Corps with a view to negotiating a truce and avoiding a battle in the area of Belsen Concentration Camp.

In occupation of the area were 800 Wehrmacht, 1,500 Hungarians with their wives and families, and certain SS Prison Guards. In the concentration camp were known to be 45-55,000 internees of whom a very large number were reported to be suffering from Typhus, Typhoid, Tuberculosis and Gastro-Enteritis. The electricity and water supply had failed: there was no bread and very little food.

The camp area consisted of the concentration camp and ½ mile North a large tank training centre with very extensive barrack buildings, a small PW camp attached in which were 800 Russians, and a military hospital.

In the interests of our own troops and the internees, and from the point of view of preventing, the spread of disease, a truce was granted on the following terms.

The German Military Authorities were to erect notices and white flags at all the road entrances, marked ‘Danger – Typhus’ on one side and ‘End of Typhus Area’ on the reverse, with a disarmed German post at each notice. German and Hungarian troops would remain at their posts armed, wearing a white arm-band on the left sleeve. The Hungarians would remain indefinitely and were placed at the disposal of the British for such duties as might be required. The Wehrmacht were to be released within 6 days and conveyed back to the German lines with their arms, equipment and vehicles. SS Guard personnel were to be removed by 1200 hrs 13 April and any remaining to be treated as PWs. SS Admin personnel would (if the Wehrmacht could prevent them running away) remain at their posts, carry on with their duties, and hand over records. When their services could be dispensed with, their disposal was left by the Wehrmacht to the British authorities, i.e. the Wehrmacht ‘sold’ the S.S.

About 50% of the inmates were in need of immediate hospital treatment. All of them had been without any food for 7 days, and prior to that living on the normal concentration camp semi-starvation scale of diet.

There were about 10,000 typhus-infected bodies, mostly naked and many in an advanced stage of decomposition, lying around the camp, both inside and outside the huts, which required immediate burial; and the daily death rate was 4/500.

The living conditions were appalling – people were sleeping 3 in a bed, mainly treble-bunk beds, and huts which would normally accommodate 60 were housing 600. There were no sanitary arrangements, and both inside and outside the huts was an almost continuous carpet of dead bodies, human excreta, rags, and filth.

There were some 50,000 persons to supply and feed, but the cooking facilities were totally inadequate. There were 5 cookhouses of varying size equipped with a number of large boilers, and the only containers available to distribute the food were a few large dustbins A large proportion of the occupants were bed-ridden, and many were incapable even of feeding themselves.

The inmates had lost all self-respect and been degraded morally to the level of beasts. Their clothes were in rags and teeming with lice; they had no eating utensils or plates, and at the time of the food distribution they behaved more like ravenous wolves than human beings.

There were 49 SS male and 26 female prison guards under close arrest and a Wehrmacht Hospital with 2,000 sick and convalescent German soldiers.

The electricity which came from Celle was cut off and the wiring sabotaged; the water supply which depended on it for pumping had consequently failed.

To prevent spread of Typhus and the other diseases it was necessary to keep all the internees within the Camp, yet the Hungarian guards were grossly lax and made little effort to prevent them from filtering out.”  More of Captain Peres Account here.

Over the next month 113 LAA took over the Wehrmacht barracks at Bergan-Belsen, which would become Bergen-Hohne Camp.   The typhus epidemic meant that the the concentration camp inmates could not be allowed to leave. They built cook-houses, buried the dead transferred the living to clean accommodation, guarded the SS men, and disarmed the Hungarians. Their soldiers can be seen in the newsreel shots. The War Diary entry for 26th April comments that over 8,000 bodies had been buried since their arrival in the camp.  The SS Guards interviewed for the newsreel seem to have lost the  SS Runes from their uniforms. These seem to have fallen into possession of the Gunners. 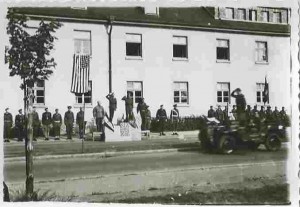 On VE Day 9th May the Regiment paraded through Hohne Camp,. Starling at the corner of the Belsen Concentration Camp past British, US Soviet and US Senior officers who took the 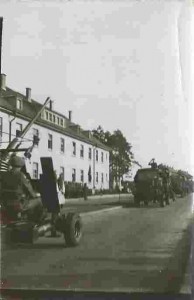 salute to the sports pitch where the 54 guns of the Regiment fired ten rounds single shot and ten rounds automatic to celebrate victory and peace in Europe.

At this point their work was only half complete. The last huts of Belsen Camp were burned with as short ceremony on 23 May 1945.

After the traumatic work, 113 LAA Regiment were given ten days leave beside the Baltic and issued 6000 bottles of beer.

A tour for Spirit of Remembrance

One thought on “From the Beachhead to Belsen: The Humanitarian Mission of 113 Light AA Regiment RA”