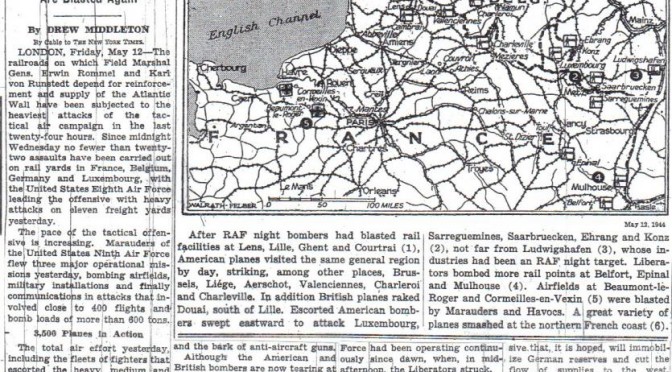 Aircraft of 419 Sqn RCAF line up

12/13 May 1944
Louvain: 120 aircraft – 96 Halifaxes, 20 Lancasters, 4 Mosquitos – of 6 and 8   Groups.3 Halifaxes and 2 Lancasters lost. The bombing was more accurate than on the previous night and considerable damage was caused in the railways yards.

One the same night the RAF also bombed Hasselt, ineffectively and carried out mining and intruder operations.  The total  effort for the night: 355 sorties, 14 aircraft (3.9 per cent) lost.  This appears to be the Bomber command war diary entry (whatever happened to the  Day by Day Bomber Command  Dairy entries?) pages?

This was the second night in succession that Bomber Command had raided Leuven (knonw by Francophone Wallons as Louvain) On the night 11-12th the results had not been satiusfactory wioth the bombing scattered and little evidence of damage to the rail infrastructure. On The raid which started shortly after midnight on 13th May caused the following damage.

for the destruction of 634 homes and become uninhabitable for 1,166 homes on a total housing stock of 4,223 homes, about 25%. A large part of Blauwput had disappeared. The 15th century Chapel Blauwput was badly damaged as the Parish Church.

The Allied Commanders responsible for planning D Day were keen to use the strategic bombers of  Bomber Command and the 8th Air Force against targets which would delay rthe rate at which allied reinforcements could reach the Normandy battlefield.  These attacks would need to take place across Belgium and Northern France to conceal the site of the landings.  British Airman Arthur Tedder was Eisenhower’;s Deputy and credited with leading the transportation plan.  There were two obstacles in persuading the allies to adopt this plan.  Firstly he had to overcome the resistance of the commanders of the strategic air forces to switch from the targets they considered important,  Secondly, Churchill needed to be persuaded that the results would justify the casualties among the allied populations.

Churchill anguished about giving an order which would kill Belgians and Frenchmen.   Churchill made many decisions during the war which would result in the loss of lives which were to  some degree or other “innocent”.  He ordered the Royal Navy to sink the French Fleet in 1940, and the aerial bombing of German cities, containing civilians and foreign workers.  The decisions to bomb key points on the railway  system in Belgium and France bothered him more than most.  Alanbrooke’s diary entry for 5th April mentions “At 10.30, had to attend one of those awful  evening meetings with the PM.  We were kept up till 12.45 a,m. discussing use  heavy bombers to support the invasion. he is opposed to Tedder’s plan”.

419 RCAF appear to have the heaviest losses, losing two aircraft and 13 men dead.

“Louvain May 12/13th 1944Takeing off at 2155 and heading out to the target the crew and aircraft were shot down near Sint-Genesius-Rode which was 12 km S of Brussels. None of this very experienced crew survived. VR-W KB710P/O H I Smith Pilot 22nd sortie F/O J Moore NavigatorF/O W R Finlayson Bomb AimerF/O W W Price Wireless Op.Sgt. R Bull Field EngineerSgt. J C O’Connell Upper GunnerSgt. S G Livingstone Rear GunnerVR-W ‘s crew was a very experienced one with many of them at the 16 operation mark. The Wireless Operator F/O Smith having a total of 22 trips. AndThe crew of VR-X had P/O Edwards and F/O Campbell who were a quarter of a way through their tours while the other airmen were on their second or third operation. VR-X KB713 P/O B F Edwards Pilot on his 8th sortieF/O R R Campbell NavigatorF/S P Dewar Bomb AimerF/S R S Smith Wireless Op.Sgt. J R Carruthers Flight EngineerP/O J A Webber Upper GunnerP/O H E Oddan Rear Gunner

419 Sqn RCAF were based at RAF Middleston St George.  This is now Teeside Airport. Photos here

Leuven was rebuilt and its name appears on every can or bottle of Stella Artois beer, which is brewed there.

No one will know whether the Battle of Normandy would have been D Day invasion would have succeeded without the bombing campaign. The civilian and air force losses  are as much a part of the campaign as that of any infantryman storming ashore.

If oyu qwould like to find out more about visiting the heritage associated with Airpower contact info@airpowertours.com