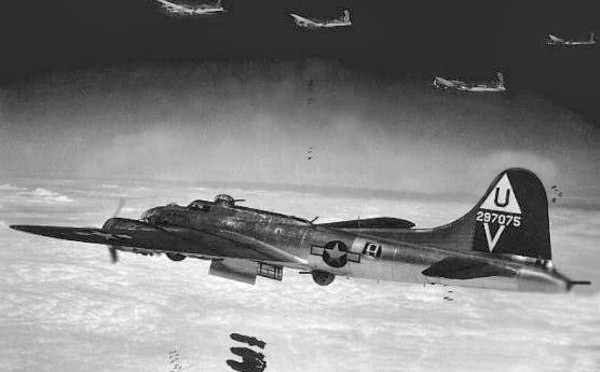 (Eighth Air Force): Mission 353: 886 bombers and 735
fighters were dispatched to hit synthetic oil production facilities in Germany and Czechoslovakia; there was strong Luftwaffe fighter reaction and 46 bombers and 7 fighters were lost:

About 800 bombers of the US 8th Air Force, with a substantial fighter escort, attack synthetic oil plants at Leuna-Merseburg, Bohlen, Zeitz, Lutzkendorf and Brux (northwest of Prague). The Americans claimed to shoot down 150 German fighters and reported losses of 46 bombers and 10 fighters.  (From Chronology of the USAAF)

Mission 353 was the first trial raid on oil targets to test the claim that the Luftwaffe would defend oil targets in Germany more than they had defended transportation targets.  RLV fighters put up their largest force ever, but five synthetic oil plants were successfully attacked.   This has been argued as part of the attrition battles which reduced the capability of the Luftwaffe to intervene in the Normandy Landings.

457 BG Mission Board may 1944.  Lutzkendorf is the forth mission on the board

One of the units participating in the attack was tyhe 457th Bombardment Group.    Their website has an account of the day  here

The long awaited blitz on the German synthetic oil refineries occasioned the largest air raid the Eighth Air Force had yet undertaken. The 45 7th furnished the lead and low boxes for the 94th B Combat Wing for the assault on Lutzkendorf, producer of 30,000 tons of petrol and diesel oil annually. The target was six miles west of Merseburg. Major Fred A. Spencer flew as Air Commander of the B lead box with Lt. Jerry Godfrey flying as pilot. Captain Jacob M. Dickinson led the B low box, with Lt. Clarence E. Schuchmann as pilot.

The weather was CAVU, but ground haze and smoke Obscured visibility. Bombing results were fair. No enemy fighter opposition was encountered, and flak was moderate but accurate. Eleven craft sustained damage.

On the return trip to the base, a German operated B-17 joined the formation near Coblenz and continued with the formation to Brussels. Also, the craft piloted by Lt. John Akers encountered engine trouble. His plane began to lag behind the formation and was last seen near Eisenach on the trip back to England. With only one engine providing power and flying at 1,500 feet altitude, the crew bailed out over Belgium and all were taken as POWs. Because of the seriousness of his injuries, Lt. Akers was later involved in a prisoner of war exchange through the International Red Cross and returned to the States. He was hospitalized until May 1946, when he was discharged.

Although the 457th’s crews saw no enemy fighters, wings of the 3rd Division met severe attacks, causing the loss of thirty- two bombers. It was reported the Luftwaffe pilots resorted to ramming the B.-17s. Total losses for the Eighth amounted to forty-two craft.

The mission was the first of many to be directed against the synthetic oil refineries.

Meanwhile, on the Base, a lack of military courtesy by members of the command was noted. As a consequence, classes were conducted for all personnel reported for having failed to salute. The course consisted of two one-hour lectures on military customs and courtesies. The crew of Lt John Akers was lost on this date

The 457th Bombardment Group were based at RAF Glatton about ten miles North of Huntingdon.   This is now Peterborough Airport.  The Water Tower is about the only surviving Ww2 structure.

If you would like to find out more about the stories of the raids on Germany and where to see the air power heritage  contact info@airpowertours.com