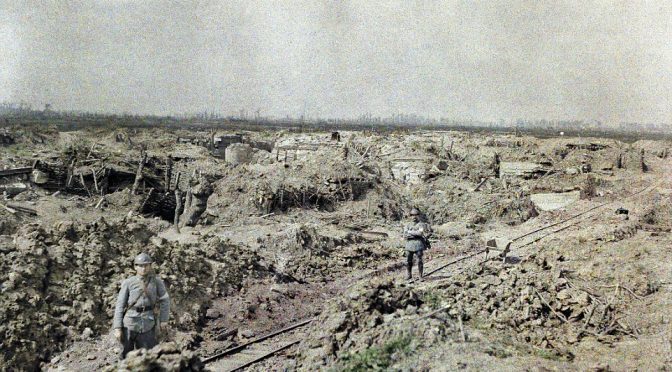 One army has been almost completely absent from any mention in the commemorations of this weekend’s centenary of the start of the 3rd Battle of Ypres. This army is the French 1st Army which also took part in the battle. Although the operation was led by the British, it was an allied operation With 135,000 men and over 1000 guns the French Army that took part was larger than the Australian, Canadian or New Zealander contingents that fought. Yet their role and sacrifices have been ignored.
The French First Army’s deployment on the British left was a commitment to the alliance, despite the strikes and mutinies afflicting their army after the failure of the Nivelle offensive April 1917. Their tactics were designed around using artillery fire to destroy and neutralise defences and seizing limited objectives to minimise infantry casualties.  The tactics used on 31st July were the first use of those methods that Petain would use to rebuild the confidence of the  French Army.

The two divisions of the 1st Army attacked on a 4 km frontage. Particular attention was paid to artillery support. The artillery included 60 batteries of 75mm guns, 240 pieces, 277 pieces of trench artillery – mortars, 164 heavy howitzers, 148 long ranged guns (105- 240mm) for counter battery fire and 64 heavy guns (305mm,320mm and 370mm) to smash concrete bunkers. This artillery train was supported by aircraft detachments for heavy artillery and counter battery fire, bomber, and reconnaissance squadrons and the elite Cigognes fighter squadron.
The French were faced with the problem of assaulting across the Yser canal against defences based on concrete bunkers. The French thought the concrete bunkers were less of a tactical challenge than the deep shelters capable of protecting entire platoons the Germans dug is drier country. The assaulting troops were preceded by a creeping barrage of shrapnel 150m ahead of the infantry.
On the 31st July the French First Army was tasked with protecting the Northern flanks of the British 5th Army. They succeeded in this mission, advancing 2500 metres, almost as far as the Guards division to their right. The French took part in several attacks in concert with the British , until the end of October.
The French had advanced some 10 km, capturing 1,500 prisoners. Their casualties were low, 1,625 killed or missing and 6901 wounded or taken prisoner. These are very light compared to those suffered by British formations, and raise some questions about British tactics.
The French army of Flanders was deployed to support the British led operation “as a matter of honour.” It is a shame that their gesture has not be remembered a century later.